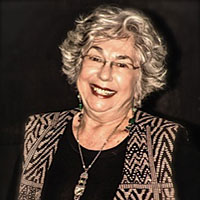 Lilly Rivlin an award winning filmmaker, writer and political activist, lives in New York City. Ms. Rivlin was born in Jerusalem and immigrated to the United States with her family in 1945. She holds a graduate degree in Political Science from UC Berkeley. Before focusing on documentary films, Ms. Rivlin was a journalist and a consultant to foundations on the Middle East. Most recently, Rivlin was selected as the 2013-14 recipient of the annual “Miller Distinguished Jewish Woman Filmmaker” Award. The concept, “the personal is political,” is expressed in the documentaries she has produced, directed and wrote; her latest is, Esther Broner: A Weave of Women (2013). Before that, Ms. Rivlin is known for her films, Can You Hear Me? Israeli and Palestinian Women Fight for Peace (2006), and Miriam’s Daughters Now (1986), which aired on PBS and Israel TV.