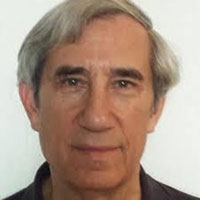 Gil is a long-time activist for Israeli-Arab equality and peace, beginning in the 1961-62 year he studied at the Hebrew University. During his 23-year tenure as a United States Foreign Service officer, he was desk officer in the Office of Israeli and Arab-Israeli Affairs, following which he served three years, 1978-81, at the U.S. Embassy in Tel Aviv, where his responsibilities included monitoring the then-nascent proliferation of settlements in the West Bank and Gaza and participation in implementation of the first (the “good”) Camp David accords.

Once freed from the constraints of governmental service, from 1995 to 1999, Gil was the Communications Director of the New Israel Fund. In 2002 he was among the founders of Brit Tzedek v’Shalom, on whose national Board he served until the group merged with J Street in 2007. He is currently a member of the Executive Committee of J Street’s New York City chapter, in addition to service on the Partners’ Board, which he joined 2016.