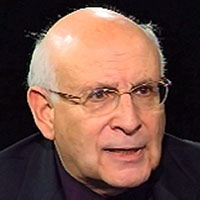 Dr. Leonard Grob is Professor Emeritus of Philosophy at Fairleigh Dickinson University, Teaneck, New Jersey, where he served for most of his career as Chairperson of Philosophy Studies and Director of the University’s nationally-recognized University Core Program in the Humanities.

A member of Meretz USA’s Board of Directors since its inception, Dr. Grob has been active in Israeli-Palestinian dialogue for over two decades. In 1983 he served as an observer and participant in an Israeli-Palestinian dialogue project with high school children in southern Israel. From 1995-1999, Dr. Grob co-directed a branch campus of Fairleigh Dickinson University in Tel Aviv.

More recently he has presented papers and has published works on the relationship between memory of the Holocaust and the Israeli-Palestinian conflict. He co-edited (with Dr. John K. Roth) a volume entitled Anguished Hope: Holocaust Scholars Confront the Palestinian-Israeli Conflict, (Wm. B. Eerdmans Publishing Company, 2008). In addition, together with a Palestinian-American partner, Dr. Mahmoud Watad, Dr. Grob has published a volume of Israeli and Palestinian children’s narratives entitled Teen Voices From the Holy Land; Who Am I To You? (Prometheus Books, May 2007).

Dr. Grob has also done extensive research in Holocaust Studies. He has authored articles and book chapters on topics such as post-Holocaust education, ethics after the Holocaust, post-Holocaust theodicy, and philosophical reflections on rescuers. Earlier in his career Dr .Grob published extensively in the areas of the philosophy of dialogue and peace studies, focusing in particular on the philosophy of Martin Buber and Emmanuel Levinas. He is the co-editor of two anthologies based on Buber’s philosophy: Education for Peace: Testimonies from World Religions and Women’s and Men’s Liberation: Testimonies of Spirit.