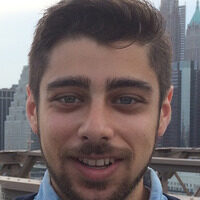 Ben is a Brooklyn-based documentary filmmaker specializing in video editing and human storytelling who is developing his first feature-length documentary about the transition from youth to adulthood for individuals on the autism spectrum. A graduate of the Film & Television Production program at NYU Tisch School of the Arts, he has spent the past 8 years editing documentaries, short films, commercials, fashion ads and music videos. Though this will be his feature length directorial debut, he recently served as an Apprentice Assistant Editor on the documentary, Nice Girls Don’t Stay for Breakfast (2018) about the late, great actor Robert Mitchum. He has also made shorter documentaries on various subjects including Juan Pablo Jofre, a prominent, world-traveling Argentinian musician (which was selected to be added to the Tisch archives) as well as the ongoing Israeli/Palestinian conflict, in which he collected interviews from politicians, journalists and civilians, examining perspectives on both sides of the issue.