In 1997 Israeli sketch comedy, Hahamishia Hakamerit, Rami Heuberger plays Prime Minister Yitzhak Rabin’s assassin, Yigal Amir. “Twenty years from now, I’ll get a pardon. You know it. In your hearts you know it.” Heuberger describes how Amir will eventually be released from prison, move to Jerusalem and become a popular hero. “And every time I will go out to the street, my entire neighborhood will stop and clap. A year later there will be a municipal election and the mayor will want to have his picture taken with me. You know it.”

Last week, on the twentieth anniversary of Rabin’s muder, President Reuven Rivlin after referring to the sketch declared: “As long as I am the president of the State of Israel, the murderer will not go free… May my right hand wither if I ever pardon this accursed man.”  In response Hagai Amir, who served 16 years for assisting his brother in the slaying of Yitzhak Rabin, wrote on Facebook: God “determined that Rabin would die even though Rivlin and his friends didn’t exactly agree.” Rivlin’s death “is not far away,” he added. The police detained Amir for questioning for this post. His attorney, Ari Shamai, argued that Amir was simply expressing “a religious belief that it is God who determines what happens” and added that the comments were merely “theological musings.” Shamai also said that “since he [Amir] got out of prison he has become a peace-seeker and a human rights activist.”

Twenty years later, regardless of President’s Rivlin’s heartwarming declaration, the sketch speaks more truth than ever. Not only can a lawyer in Israel now argue that Hagai Amir is a human rights activist, last week, an officer cadet was dismissed for comments supporting Rabin’s murder. A recent poll discovered that 55 percent of religious-Zionists believe that Yigal Amir did not murder Prime Minister Rabin. Seventy-three percent believe that Amir was not a lone gunman and 68 percent want the president to commute Amir’s sentence. To commemorate the assassination, the American program This American Life produced a documentary revealing that despite lots of witnesses to the assassination, and Amir’s immediate confession which he has never recanted, a third of Isralis believe in conspiracy theories about the assassination:

Even Amir’s own mother believes her son was a patsy in a wider conspiracy. During an interview with Hagai Amir, Geula Amir, the brothers’ mother, demanded that her son “tell the truth,” and began arguing with him about the events of that night.

The rightward shift in how Israelis understand Rabin’s murder was evident in the mass rally commemorating it. The organizers, “Remembering the Murder, Fighting for Democracy” tried to depoliticize the murder by seeking “a common ground of a moderate and balanced center” to attract the broadest possible attendance. In other words, they blurred political positions, ignored Rabin’s legacy and turned the rally into a statement of national unity.

However, as anyone familiar with Israeli politics knows, today’s “moderate and balanced center” has moved markedly to the right since Rabin’s murder.

Thus, while a hundred thousand people attended the rally, many on the Israeli Left were not so enamored with the outpouring of solidarity and pointed to its clear rightwing slant. 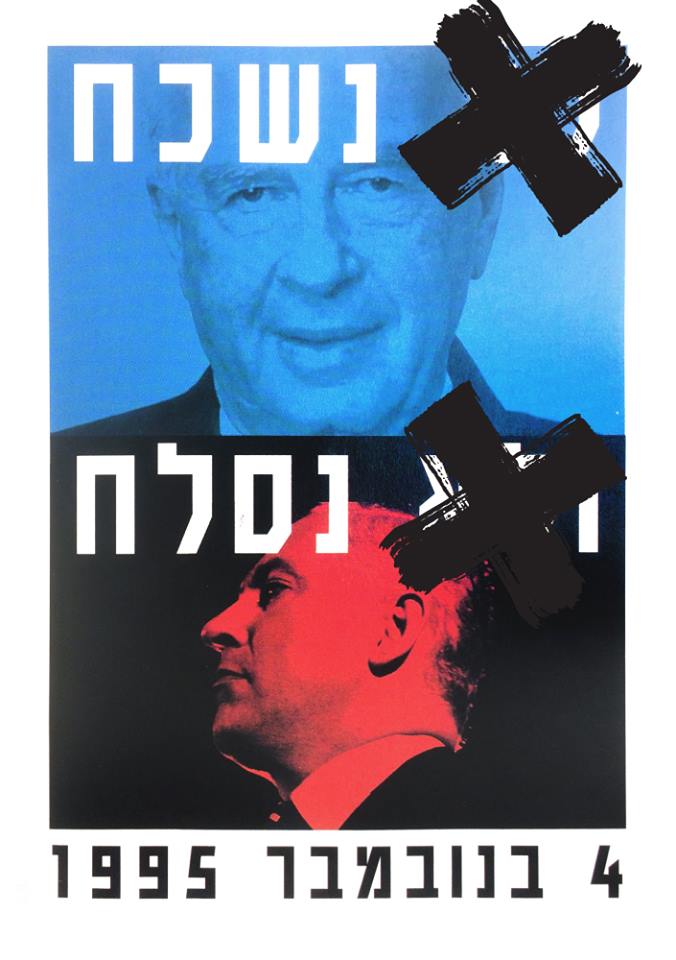 Dror Morag, the outgoing General Secretary of Meretz, sharply criticized the rally. “Leftists like former President Peres, who attended the rally, were not allowed to speak, but representatives of religious Zionism – were,” he wrote. Indeed, the rally’s speakers included Rabbi Yuval Cherlow, a close associate of Rabbi Nachum Rabinovich, who in 1993 compared Rabin’s government to the Nazis and issued judgments of din moser and din rodef and Sarah Rosenfeld, a bereaved mother from the settlement Kokhav Hashaher. Her son Malachi was killed in a terrorist attack near the settlement of Shilo in the West Bank. She has since called for the death penalty for terrorists.

President Rivlin was also there. He has spoken on many occasions in Hebron alongside Rabbi Dov Lior, the rabbi of the Jewish Underground, who lauded Baruch Goldstein after he massacred 29 Muslim worshippers and has been fingered as the source of the religious rulings legitimatizing Rabin’s assassination.

As a result of the rally’s “depolitization” some of Morag’s friends, who attended the rally wearing Meretz t-shirts were told that partisan shirts were offensive under the circumstances. “If this is the democracy youth movements teach today, we are in trouble,” Morag writes. “Politics and political parties are the epitome of democracy at its best.”

Morag argues that Rabin was murdered because he struggled for peace and we must commemorate his legacy on the day marking his assassination. “It is defeatist to blur the truth and avoid a political rally simply because it would alienate large audiences. We should rise up against this false unity.”