Israeli Politics: A Time for Reflection
By Joshua Shanes

What is the significance of the latest Israeli election, which produced a stable coalition of extreme rightwing and  Orthodox parties to rule the country, including a record fourteen seats for the neo-Kahanist “Religious Zionist” party?

Many have tried to minimize the significance of the rightwing victory by emphasizing that the vote was in fact far closer, with only slightly more than 50% of votes going to the Netanyahu bloc. The problem, they say, is that two major leftwing parties – Meretz and Balad – fell below the 3.25% threshold and their votes were thereby lost. They place the blame on Labor’s leader Merav Michaeli, who refused to join with Meretz, and Sami Abu Shechadeh of Balad, who likewise insisted on going it alone. For that matter, Yair Lapid himself refused to negotiate a merger of Meretz and Labor – the way Netanyahu deftly brought the neo-Kahanists together into the Religious Zionist party – and even undermined the Left’s chances by allegedly campaigning mostly among themselves rather than trying to peel off voters from the pro-Netanyahu bloc.

Admittedly, I don’t like blaming poor political decisions by the opposition for the election of dangerous extremists, any more than I like focusing on lazy or radical Democrats for the victory of Trump in 2016, rather than focusing on those who empowered him. But there is a more significant problem with this line of thought that we must understand if the future course of Israel is going to change.

It is certainly true that had Michaeli, Lapid and Shechadeh gotten their act together, they might have avoided the problem of lost votes and potentially even stopped Netanyahu and his neo-Kahanist allies from winning, but only for a moment. Unless they won 61 seats (not just 60) and included the Arab parties in their government, which some members of that group adamantly refuse to do, it would have simply triggered elections in the spring. A leader of Gantz’s party said outright that he preferred a sixth election to a government with “the Arabs.”

More importantly, this argument ignores the current nature of Israeli political culture – and specifically Jewish Israeli political culture – and the platforms of the parties in that anti-Netanyahu bloc. That bloc includes Avigdor Lieberman and his “Yisrael Beitenu” party, for example, which openly seeks to strip Arabs of citizenship and promotes other racist ideas that were once considered beyond the pale but now are called part of the opposition to the Right! It also includes Gideon Saar and his “New Hope” faction, a splinter group from Likud that joined with Benny Gantz for strategic reasons. Adding those two groups alone to the 64 seats in Netanyahu’s bloc shows that the rightwing earned not 64, but rather 74 seats in this Knesset.

It is worse than that. Even the rest of the so-called “leftwing” – the remaining 36 seats of anti-Netanyahu Jewish parties (the “Joint List” and Raam together won 10) – does not actually stand with the Left when it comes to the issues of the Palestinians and the occupation. For example, Lapid, Gantz, and Labor all insist that the settlements are mostly or entirely legal and part of Israel and support the continued domination of Israel between the River and the Sea (even Labor insists Israel will keep the Jordan Valley) but simultaneously oppose the extension of citizenship to occupied Palestinians. Indeed, the last government under Bennett and Lapid – including most of the so-called leftwing (even Meretz) – oversaw thousands of new housing units in the West Bank, mostly outside settlement blocs. The settlers have won, in more ways than one.

Meanwhile, millions of Palestinians ruled by Israel in the West Bank – not to mention Gaza, where Palestinian lives are still subject to Israeli control – are not eligible to become citizens and cannot vote for the government that rules their lives. This was a “democratic” election in that every adult Israeli citizen – Jewish or Arab – could vote. However, that is a circular fallacy that ignores the fact that millions of Arabs ruled by Israel cannot become citizens like their Jewish “neighbors.”

The most rightwing population is also much younger and more religious than its opposition, meaning that it is growing as a percentage of the overall population and quickly. According to the Pew Foundation – a gold standard of public polling – 79% of Israeli Jews say that Jews deserve preferential treatment in Israel, including 97% of Haredim, 96% of Religious Nationalists, and even 69% of secular Jews. Nearly half of Israeli Jews (48%) say that Arabs should be expelled from Israel, including 71% of religious nationalists.

In short, it seems that the problem is not simply a single election result, which perhaps with better politics could have been delayed. The problem runs deeper, and therefore the solutions are different. It requires rethinking orthodox (pun intended) ideas about Zionism and Jewish power. I read many responses by self-described “centrists” or even “leftists” with nationalist tropes about this being “our land” as a sincere lament about the election results. While I appreciate the heartfelt laments, I think they miss the point that such language helped create the problem in the first place. This is apparently nationalism’s almost inevitable denouement, particularly in a situation of colonial expansion, as is happening in the West Bank.

The answer, our hope for Israel, comes from understanding this reality and reimagining the nation itself, or at least the community that the state is supposed to serve. It comes from Israel building a new liturgy of “I have no other land” that includes Jews and Palestinians together. The lesson of this election is not about more careful campaigning in the future, or the comfort that almost half the votes didn’t want Netanyahu in charge. Rather, it is about understanding the nature of the problem and building a vision of Israel – and political parties that advocate it – that opposes rather than accepts (or even demands) indefinite Jewish hegemony and occupation. Only a widespread revolt against this so-called “status quo,” encouraged by outside states (especially the United States) and Diaspora Jews, will change this reality.

People are already getting to work. Meetings and organizations are building such visions at the grass roots level. Let’s support them in every way possible, including through open-eyed descriptions of what “status quo” truly means and what an equal future could mean instead. 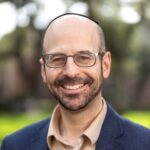 Joshua Shanes is Professor of Jewish Studies, and Director of the Arnold Center for Israel Studies, at the College of Charleston. He has published widely on modern Jewish politics and religion in both academic and popular outlets and is currently completing a history of Orthodoxy from its German origins through today.