Let’s begin at the end—Go see Michal Aviad’s new film Dimona Twist. This marvelous movie is also about my mother, about women who lived in Casablanca and other modern French colonial cities that resembled Paris far more than Dimona.

Women who migrated with their families and dreamt of a Jewish harmonious Garden of Eden. They found themselves deceitfully and deliberately pushed off trucks in God forsaken far away places like Dimona, Beit Shemesh and Bat Yam, to fulfill a national dream of conquering the desert and settling the land; an aspiration that others dreamt up for them. The Women could not comprehend the display of superiority by the locals and were furious at the arrogance of “the first Israel toward the second Israel,” which was, as one of the women says, unjustified.

A woman who sat next to me at the screening of the film, said to her friend, “Such amazing women, and what a negative image we have had here.”

There are, and we can recount many and varied stories about the immigration of Mizrahim and about development town and about Dimona. Michal Aviad film highlights a voice, their voice without the intrusion of the male voice; seven women, six Mizrahi and one Ashkenazi recount their early lives in their childhood countries, their migration, their youth and their life now.

The lives and thoughts of strong, wise and funny women, who have struggled against sheer state negligence, like that of a six months old baby brother of one of the women, who died of dehydration travelling from Haifa to Dimona. The women have faced ethnic discrimination from the Ashkenazi Absorption institutions placing of Mizrahi children in trade schools while Ashkenazi children were placed in schools geared to higher education. They faced job discrimination and children sent routinely and alone to radiation centers on the suspicion of ringworm of the scalp. Yet a number of the women have also suffered and fought violent of fathers and husbands who smothered their lives. 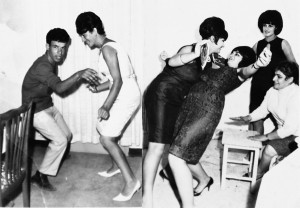 The word feminism does not appear in the film; yet it exposes the reality of Mizrahi feminists in Israel long before the term came into use. Independent women who free themselves from a social, familial and marital confinement; women who as factory workers fought courageously and successfully during the day against the owners “Kitan Dimona,” and at night danced the twist.

The women’s voices are heard against a rich and rare collection of old pictures and archival films that took years to assemble. Blending archival material and women’s voices speaking directly to the camera creates a compelling world of minimalism and restrain that refuses the trap of clichés; it avoids the usual ethnic talk and the emotional manipulation of the women’s painful experiences. One could not have made a more empathetic film.

The film succeeds in the difficult task of avoiding boredom, a rare experience for anyone who has watched yellowing photos and archival films. Dimona Twist is truly a unique esthetic experience. An alternative feminist pillar of fire.

Prof. Yossi Dahan is an associate professor of law at the Academic Center of Law and Business in Ramat Gan, Israel, where he is also the director of the human rights program. Dahan has published three books: The Discourse and Practice of Social Justice in Israel (Jerusalem: The Van Leer Jerusalem Institute, 2012), Theories of Social Justice (Hotsaa Laor, 2007), and The Invention of Nationalism, co-edited with H. Wasserman (Tel Aviv, Open University Press: 2006) (all in Hebrew), and over thirty articles on political philosophy, distributive justice, human rights, welfare and education policy, labor law and democracy. Dahan is the founding chairman of Adva Center, a center of policy analysis and advocacy from a social equity perspective, and is the founding editor (together with Itzak Saporta) of Haoketz, a critical social, political and cultural blog, where he has written more than 600 posts.​

You can find the original blogpost in HaOketz

More on the film.