The 37th World Zionist Congress: What’s It Good For?

The 37th World Zionist Congress: What’s It Good For?

This post was contributed by Efrat Levy, who participated in the World Zionist Congress as a delegate on the Hatikvah slate:

In mid-October I joined others from Partners for Progressive Israel and Hashomer Hatzair as a delegate to the 37th World Zionist Congress, as part of the Hatikvah Slate. This slate, after some dealing with som

e shenanigans during the elections and lead-up to the Congress (which were to be repeated in Israel) ended up with 8 delegates, including activists from J Street, J Street U, and Open Hillel. We joined together with Arza (Reform Zionists) and The Green Israel list to form the largest caucus at the Congress, 182 delegates. Together we took the lead on passing a number of meaningful resolutions during the final Congress plenary:

All that sounds good. But what is it actually good for?

First established by Theodore Herzl himself, the World Zionist Congress is the legislative authority of the World Zionist Organization and decides on policies of the WZO and of the Jewish Agency for Israel. This combination is what theoretically makes the Congress relevant to both Israeli and Diaspora Jews. Since 1948, the Congress has met every four or five years, in Israel. Representation to the Congress varies from place to place. In our case, the decision was made based on an election. One of the other delegations, the Zionist Organization of America, was determined to eliminate our slate in advance and levied a barrage of ridiculous (bordering on libelous) accusations against us, which were dismissed in a variety of court hearings.  In addition to this, elections in several countries were somehow cancelled, so for example, there were no representatives from Bulgaria, despite a vote of more than 50% of the adult Jews there.

Still, the Zionist Congress is supposed to work is as an indirect democracy.  Delegations are selected and appear at the Congress. The number of delegates is technically around 700 (half from Israel), but many stayed away because of the eruption of terror attacks shortly before the Congress. The next order of business is looking at the various proposals submitted (all of which were vetted by a central committee of some kind). Delegates to the Congress were presented a booklet of 90 resolutions.

Over the first day and a half, in a combination of large group meetings and discussions by slate leaders, a plan was worked out for how we should vote. The delegates were all assigned to one of 8 committees, which were given the proposals most relevant to the subject of that committee. While the groupings of proposals seemed to make sense, the names of the committees were not that meaningful – the one I sat on, for instance, was called “A Free People in Our Land.”

Theoretically, the idea was for each committee to have a serious discussion/debate and then vote on whether to move forward the resolutions to the plenary. But it was not so simple, in part because alongside each resolution, it was made clear which delegation had submitted it.

The first evidence of chaos and hooliganism was in the committees. A few committees got through things pretty smoothly. Not mine. We had 15 resolutions to discuss. Twelve of them were submitted by one of the groups in the Hatikvah slate (and of those 9 from the World Union of Meretz). It also, however, meant that our “adversaries” were well prepared. These terms are ridiculous but it played out in just that way. Clearly the strategy of the Likud representatives and those from the ultra-Orthodox parties, was to delay making decisions because nothing that was not decided on in committee was moved forward to the plenary. They also engaged in name-calling, accusations of treachery and anti-Semitism, and generally very boisterous behavior. I think the best accomplishment from our committee was successful cooperation with the delegation from Mizrachi US. By compromising on some language, we were able to move forward a few proposals that one might never have guessed would get support from an orthodox group.

Then the big day came for actually voting on the resolutions that somehow made it past the committees. We all gave in our voting cards and were handed electronic voting gadgets, which stopped the voting about a dozen times because people claimed they were not working (usually when the vote was very close). I cannot possibly begin to capture the fierce and sometimes ugly behavior of people from a variety of slates. At one point, the head of the World Union of Meretz was physically assaulted — really! We had about 20 members of Hashomer Hatzair currently in Israel rush the stage area to protect him. Scarves were thrown at the speakers, flowers were ripped out of the dais display to be thrown at speakers, people were yelling from their seats. It was like watching a battle of gladiators, with screaming audiences on both sides of the auditorium vying for the upper hand. I admit my voice was hoarse. By the end of an hour past the time allotted for the voting, less than half of the resolutions were voted on. I cannot really dignify this event any more by describing it further. 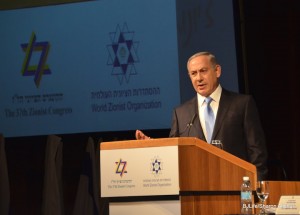 ister Netanyahu made during his speech to the World Zionist Congress. I have nothing to add —  except to say that what was just as noteworthy as his utter stupidity in blaming the Palestinians for the Shoah, was that his speech was totally flat. He did not manage to engage the audience at all and most felt he was almost totally out of touch with reality.

So again, what is all of this good for? I would say, honestly, not much good at all. I doubt if one Israeli out of 100 even knew it was happening. And for all the meaningful victories we managed in passing very progressive resolutions, there is little to no chance that any of them will actually be implemented. Still. . .

We were a tangible presence at the Congress – even the incessant attempts to silence us mean that we have some power in the global Zionist community. The group of young shomrot and shomrim participating in Hashomer Hatzair’s shnat gap year program were very visible, along with other young members of “blue shirt” youth movements. Some alumni of Hashomer Hatzair, along with other political activists now living in Israel, made themselves known, getting thrown out of the building several times as they tried to ask why the Congress was not talking about the Occupation at all. (Good question!). And – many of the delegations were heard whispering about how the Meretz delegates had better food than everyone else. So all in all, there should be no question about whether we should continue participating. Rather the question should be how we can better get out the vote next time and make our delegation stronger.

I also would like to include a few things about the World Union of Meretz convention that took place before the Congress. For two days about 100 people from around the world, and from Israel, met to get to know each other, to review what I saw as arcane goings on of the “National Institutions” in Israel (the most volatile of which was the decision of who would head the JNF for the next five years), to vote on a constitution (which, for the first time, now requires representation on the WUM secretariat from the Diaspora), and to prepare for the Congress. We heard from two wonderful speakers: Gershon Baskin (a leading peace activist in Israel, who was a key player in the release of Gilad Schalit); and Muki Tzur, a veteran educator (and one of the editors of the book “The Seventh Day” – “Siach Lochamim in Hebrew, a seminal book of the Israeli peace movement published shortly after the Six Day War, and now getting renewed interest as proof that not everyone was celebrating the victories in June 1967). Both were thought provoking and energizing.

For me, the absolute best part of the exhausting week was the opportunity to meet other like-minded activists from around the world. It was inspiring to see people from the age of 20 something to the age of 80+ who are giving of themselves to the values I believe in. I hope that over the coming years, we can find a way to move beyond acquaintance to building a worldwide network of action and influence.