Zulat: Working to Reestablish the Legitimacy of Democracy, Equality, and Human Rights in Israel
BY ZEHAVA GALON

After serving 16 years as member of the Knesset, and 6 years as the Chairperson of the Meretz party, on May 21, 2020, I announced the launch of Zulat for Equality and Human Rights. Zulat is a unique institute that combines research and analysis with social media and traditional media activism, positioning us as a bridge between the political arena and civil society. Zulat’s research studies lay out the political and public reality, but our work only begins there. As an activist think tank, we fight back by working to set an alternative agenda, change the public discourse, and advance policy and legislation to uphold democracy and human rights. (Read our mission statement.)

Over the last three months, the COVID-19 pandemic has caused a health-economic-educational state of emergency in Israel. But the focus of Prime Minister Netanyahu has been on evading conviction for criminal offenses with the help of a deranged annexation plan and a scheme to destroy the judiciary. The government emasculated the Knesset with the anti-democratic “Coronavirus Emergency Law,” while Netanyahu has been attacking the “leftist” media, ranting against protesters whom he calls “disease-spreading anarchists,” and pathetically trying to portray himself as an innocent victim. I am happy to share with you some of what we have done to combat these worrisome trends.

This report shows how, in less than a decade, the annexation of the occupied territories turned from an outlandish idea espoused by the lunatic fringes of Israeli society into the declared policy of the Israeli government. This was accomplished through the use of laundered language that normalized concepts like “application of sovereignty” and “annexation.” The report received extensive coverage, including articles and mentions in Hebrew, English, and Arabic media.

The report was accompanied by a scathing campaign on social media that carried a clear message: This is not just about “annexation”; this is apartheid. 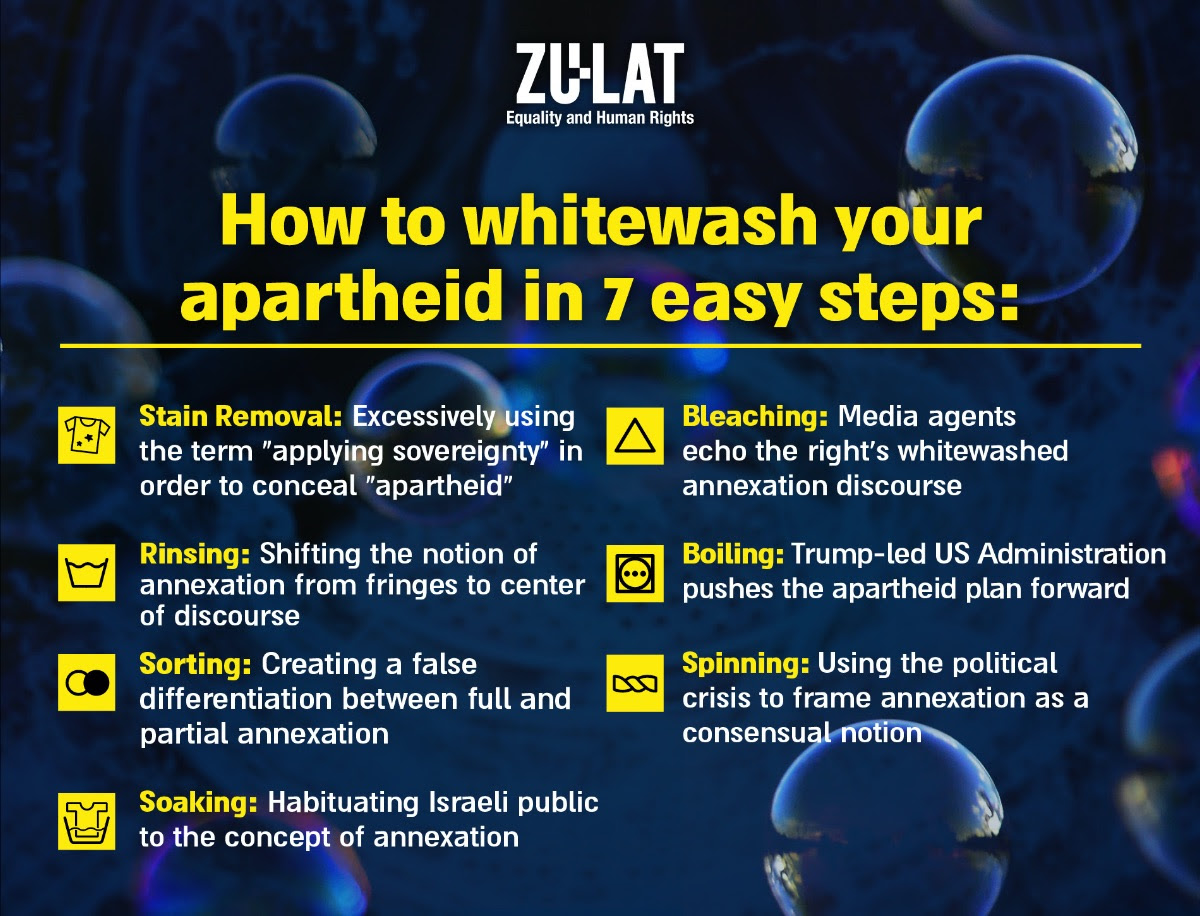 WE PUBLISHED A PUBLIC OPINION POLL

In a survey conducted on Zulat’s behalf, Dr. Dahlia Scheindlin, a strategic consultant and pollster, examined a number of issues at the top of the public agenda and found cause for optimism: The Israeli public is aware of the danger to democracy, so 67% want to strengthen the judiciary, and a clear majority of 77% supports the enactment of a Constitution.

Zulat has published position papers with operative legislative proposals to safeguard the right to protest and to protect journalists. This comes in response to police violence against demonstrators exercising their right to protest outside the prime minister’s official residence in Jerusalem and throughout the country and against journalists covering the protests, as well as in response to Prime Minister Netanyahu’s ongoing incitement against the media. Zulat’s proposals have been adopted by MK Nitzan Horowitz, chair of the Meretz party, Labor MK Merav Michaeli, MK Tamar Zandberg, the head of the Meretz faction, and MK Ahmad Tibi, the head of the Joint List faction, who intend to advance them as legislation to be enacted by the Knesset.

WE ORGANIZED WORKSHOPS FOR DISCOURSE INFLUENCERS

We conducted a series of workshops for desk editors of websites on how to provide fair and appropriate coverage of minority groups in order to promote human rights and advance equality in Israeli society.

Zulat is in the process of drafting reports on the following:

What Netanyahu has been marketing to Israelis as “peace for peace” with the United Arab Emirates amounts to nothing more than the normalization of existing relations, which Netanyahu paid for by waiving the annexation of the territories and removing Israel’s opposition to the sale of advanced fighter jets to Dubai. But the “peace for peace” branding of the agreement is significant because its main purpose is to lend ostensible legitimacy to the occupation of the territories, and to sell the Israeli public the illusion that peace with the Palestinians can similarly be reached without having to pay any price.

The authorities failed in their treatment of the elderly following the COVID-19 outbreak. Nursing homes were neglected, resulting in high rates of infection and mortality. Senior citizens were ostracized and patronized, as officials issued warnings to stay away from them and, along with the media, characterized the entire 60+ generation as “grandparents.” This paternalistic policy violated their right to live with dignity as part of a multigenerational community.

The Netanyahu government has weakened the role of art as a political mechanism to protect human rights and democratic values.To silence criticism of government policies, it has used cultural warfare tactics and populist sanctions, such as branding outspoken artists as traitors and withholding their funding. This onslaught against freedom of speech has muted the expression of resistance through art and culture in Israel.

Zulat has gotten off to a propitious start, but there’s a lot of work ahead of us. As I write these words, Netanyahu is basking in the light of the deal with the UAE, but we are not fooled. While the agreement scuttled any immediate plans for de jure annexation, it has given new life to the Trump plan, pulled the rug out from under the Arab Peace Initiative, and hung the Palestinians out to dry. Meanwhile, the fate of Israel’s dysfunctional coalition government remains uncertain, and there are no signs that the anti-government protests and the violence and incitement against the protesters are subsiding. It is precisely for challenging times like these that I am proud to have established Zulat.

Zulat is a nonprofit organization that relies on donor support. You are invited to join them on Facebook and follow them on Twitter.
By Admin| 2020-09-29T14:28:22-04:00 September 14th, 2020|Civil Rights, Democracy, Israeli Left, Kolot, Programs, The Occupation|0 Comments