President Rivlin delivered a major speech at the European Parliament this week. Rivlin spoke against the French peace initiative and negotiating a peace agreement.

Rivlin made some excellent points. He spoke of the difficulties in negotiations, the split between Fatah and Hamas and the need to promote economic and infrastructural development in the region. But I think, Rivlin was not entirely honest. The President drew an accurate picture, mostly. But it was only a partial picture.

Rivlin said that “any political agreement that an elected government brings before the Israeli Knesset will be approved.” Maybe. But last I checked our elected government included some representatives who would angrily oppose any agreement. Only yesterday, the Deputy Defense Minister said he supported annexation. Last I checked, this was the Jewish Home’s platform. We know that this is also the platform many Likud members support too. We know, because they told us so explicitly. In fact, last I checked, Rivlin himself was a vocal supporter of the one-state solution.

So perhaps it is true that if our elected government brought an agreement to the Knesset, the Knesset would approve. But I don’t think this government wants an agreement. I think the government has a two-faced policy: they want to talk about an agreement, while continuing to build settlements. There are advantages to talking. It reduces the international pressure and creates a political space to continue building settlements. This is another thing Rivlin did not mention.

Settlements were not mentioned in the speech. I searched. No settlements, no outposts. And this is important because the settlements are the main reason the international community pressures Israel. We know because our friends around the world tell us. Settlement construction disturbs them because they fear the government is building in order to create irreversible facts on the ground and avoid an agreement. The more Israel builds, the more settlers will have to be evacuated [when and if an agreement is reached]. The economic cost will be huge, but the suffering will be even greater. The government is incentivizing hundreds of thousands of Israelis to move to the occupied territories, and one day they will find themselves leaving behind the homes they had built there.

The Government’s policy is to manage this eternal conflict. This is the life Netanyahu promises us: continued military rule over the Palestinians, an alienated world and recurring rounds of violence. Netanyahu thinks this is a stable status quo. I think we are experiencing the collapse of this model, and Israeli citizens are paying in blood. It is delusional to think that we can lead a normal life here while ruling over millions of Palestinians. There is no status quo. By rejecting the French initiative Rivlin and Netanyahu are leading us to a one state.

Some in the government support a one state solution. Can anyone imagine this on-state will be founded on equal rights to Palestinians? Would those who promoted legislation aimed at getting the Arab parties out of the Knesset give Palestinians the right to vote? The current government has even hampered the five-year plan to assist the Arab sector. Only this week we learned that poverty rates in East Jerusalem increased by eight percent. Inequalities produce terror — terror will be used to justify the inequality — and we will live in a bleeding country.

It is important to discuss Rivlin’s argument. There are indeed enormous difficulties in negotiating with the Palestinians. And the failure of negotiations increases despair and violence. We cannot deny it. I agree that we can do a lot to improve the situation in Gaza, the West Bank and East Jerusalem and that we can take confidence-building measures right now.

But Netanyahu is on his way to Europe to attempt to soften a Quartet report on – surprise, surprise – settlement building. Rivlin was clearly trying to help. But I do not think he is helping. I don’t think it helps anyone to continue that charade pretending that the status quo is stable and that settlement construction doesn’t endanger our future.

This is the truth. Everyone can see it. That mask is long gone. 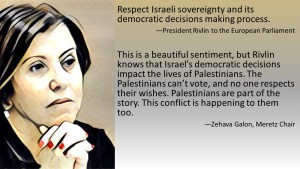 You can find the original text here.