Zehava Galon: Israel is Turning into a Facsimile of Worldwide Antisemitism

Zehava Galon: Israel is Turning into a Facsimile of Worldwide Antisemitism

Three stories in the news today:

A Jewish guy calls a gym asking to join. They respond, “We’d love to have you. Come join.” An Arab guy calls ten minutes later and they tell him, “We’re booked throughout February.”

A factory in Jerusalem seeks a Jewish forklift driver to replace its Arab workers. The factory representative told a Ynet reporter who uncovered the story, “We have Arab [employees], but we want to hire our guys. We understand there’s a catch – Arab labor costs half as much.” It seems there’s another catch. The fact that this sickening discrimination is against the law doesn’t bother them that much.

Meretz MK Issawi Freij opened Yediot Ahronot this morning and found his picture in the place of MK Basel Ghattas alongside a story about Balad MKs [who met relatives of Palestinian terrorists]. Because what’s the difference between one Arab and another? 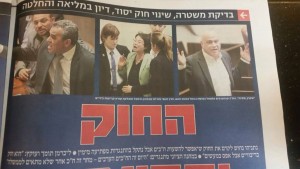 These are the three racist stories of the day. There are many like them. Every single day. All the time. Some reach the news. Most of them we never hear about. They remain engraved in the hearts of every man, woman, boy or girl affected by them.

We did come to this disgraceful situation by mistake. Over and over again we hear this government’s Ministers equate all Arabs with terrorists, who’ve committed terrible crimes. What else could we have taken from their example except fear and racism? What else can we conclude when the Prime Minister makes good behavior a condition for Arab communities’ right to receive equal budget expenditures? What else can we conclude when we are exposed to rhetoric which erases all Arabs’ humanity and turn each and every one of them into a potential terrorist?

The Israeli government fails to protect its citizens, Jews and Arabs alike. At the same time, it excels at inciting them against each other and condemning worldwide antisemitism while ignoring the fact the Jewish state has turned into a facsimile of all the horrible things that has happened to us.

The government should stop giving tacit support to these racist practices. It should instruct the police and prosecutors to act mercilessly against racism in Israeli society and ensure the introduction of anti-racist education in schools.

But we too have a role to play as long as the government doesn’t fulfil its duties. Don’t close your eyes to these stories and share them. Choose to buy and do business only with those who don’t discriminate. Don’t be ashamed to write and speak against racism and for the values ​​you believe in. I promise you that you will discover that most people around you think like you. You can help them and yourself know that we are the majority. And with that we can beat hate.