When an e-mail message arrived in my mail box with the unlikely subject title “Would you like a train ride?”, well, I had to be suspicious. But…as you can see below, it was on the level. She was referring to the new Light Rail train in Jerusalem, which finally began operating, with free rides during the first two weeks, last Friday.

From: xiaoyu zhang
Dear Hillel,
This is Zhang from China Radio. Hope you still remember me: I’m planning a report about the new trail [train] in Jerusalem and would like to invite you for a ride and hear some of your comments. Would you do me the favor? I’m especially interested in opinions of Palestinians in
east Jerusalem but don’t speak their language, and most of the time they hide from foreign media of what really is in their minds.
Are you available anytime tomorrow? Or Thursday afternoon, if it’s better for you. We can meet at somewhere along the route, like Zion Square, or at the New Gate of the Old City. … Thanks a lot and looking forward to seeing you.
Zhang
China Radio International

So, we ended up meeting at the Damascus Gate station on the new Light Rail line, and made the trip together from there to the end of the line in Pisgat Ze’ev. It was fascinating, heading from the walls of the Old City, past Meah Sha’arim on the left, Wadi Joz and Sheikh Jarrah on the right, then on via the middle class Palestinian neighborhoods of Shoafat and Beit Hanina, till the current end of the line at Pisgat Ze’ev.

Palestinian and Haredi families were clearly treating the free ride like a summer camp excursion. Of course Xiaoyu used my “linguistic skills” to ask the locals their opinions of the phenomenon.

One Palestinian said that he was taking the ride every day since it opened from Shoafat to his place of work, leaving his car at home. Where does he work? At the Al-Aksa Mosque on Haram Al-Sharif/The Temple Mount. He admits there still seem to be some kinks in the works, since by car it would “take three minutes”, while the Light Rail ride takes 15. 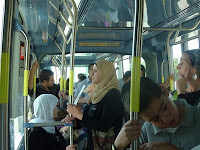 A teenager from French Hill was taking his racing bicycle (he hopes, if they let him), to the controversial Kalatrava Bridge at the entrance of Jerusalem, hoping to head out from there to Beit Shemesh. Uriel, a Haredi from the Caucasian Mountains who lives in Pisgat Ze’ev, said it was the first time he had ever been in Shoafat and Beit Hanina. When asked if he had any security concerns, he responded “we live in a land of miracles, and will be protected.”

We got off at the last stop, and then headed back to the Shivtei Yisrael station between Wadi Joz and Meah Sha’arim, where the old Mandelbaum Gate used to stand — now the Mandelbaum gas station.  She did a serious interview with me about the implications of it all, for Palestinians and Israelis, in the refuge of the 4th floor of the National Palace Hotel, which agreed to serve us ice tea, despite the fact that the sun hadn’t set yet, and the Ramadan fast was still on.

I added that while both the Israelis and the Palestinians we met on the train seemed be enjoying the experience and hope that it will provide good answers to daily transportation needs, it is clear that at the political level, Palestinians believe that the creation of the Light Rail system is a unilateral action by the Israeli government and the Jerusalem Municipality, a form of “creating facts on the ground”, which was done without consultation and cooperation with them.  While I don’t believe that the Light Rail system will necessarily be an obstacle to a solution for Jerusalem, particularly since the two capitals should form an open, interconnected city, the political realities and needs must be taken into account.
She promised to send me a link to the program.
Hillel Schenker
Co-Editor
Palestine-Israel Journal
By hschenker| 2011-08-24T12:49:00-04:00 August 24th, 2011|Blog|0 Comments