Winter in Tel Aviv [and in Jerusalem]

Winter in Tel Aviv [and in Jerusalem] 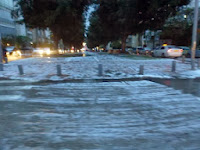 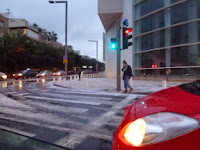 I was having coffee with a friend at the Tel Aviv Cinemateque,   after the big 3rd annual Peace Now- organized “Conference of the Israeli Left” at the ZOA House (over a thousand people came despite the weather); when we went outside at about 4:20 in the
afternoon, I was shocked to see snow on the ground, considering that it hasn’t snowed in Tel Aviv since 1951! “It’s hail” someone in the know said.   Still, an unusual scene in Tel Aviv, known as the White City for other (architectural) reasons.  I shot these photos outside Habima, and on King George and Tchernichovsky Streets. 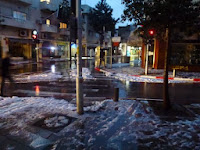 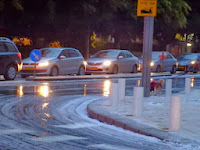 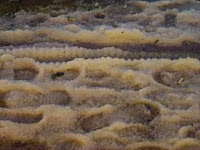 [And up to a foot and a half of snow in Jerusalem — the most in 50 years (right, from JTA).  The same storm system has caused a flooding crisis in the Gaza Strip.]