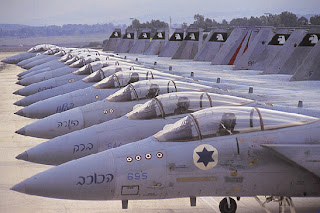 Jody Rudoren, the NY Times’ still relatively new Jerusalem bureau chief, continues to make her mark directly, through her byline.  In this piece, she unveils a view that Israel’s saber rattling has been meant as pressure on the United States to commit to stronger measures against Iran’s nuclear development, including a pledge of military action by mid-2013 if Iran crosses certain “red lines.”  If so, Israel’s beating of war drums makes sense as a strategy.  This dovetails with what I’ve blogged previously on the urgent need for the US and Israel to more closely coordinate regarding Iran, to both allay the danger of Israel freelancing and to more effectively deal with the Iranian nuclear challenge.

Rudoren quotes Israel’s recently resigned national security advisor, Uzi Dayan, that Netanyahu and Defense Minister Ehud Barak have not yet decided to strike Iran, but are trying to “pressure the Obama administration and the international community” for tougher measures:

While Mr. Netanyahu and Mr. Barak have been criticized as “messianic” in their thinking on the Iranian nuclear issue and are widely viewed as ready, if not eager, to take military action to stop it, Mr. Dayan said they would prefer that the United States led any attack, even if that meant waiting until after the November presidential election. But “they have to make the decision whether to strike or not before November,” he said, so they need to hear from Mr. Obama “in the coming two weeks, in the coming month.”

In the meantime, the BBC and The Forward picked up blogger Richard Silverstein’s publication of a document detailing a 4-step Israeli attack plan.  If this is not a complete fabrication, it is either a
deliberate Israeli leak to further pressure the US to commit to military action after the election, possibly by mid-2013, or it’s an act of desperation by an Israeli with inside information who wishes to forestall a war.  The “plan,” if that’s what it is, sounds tactically brilliant.  Silverstein, on the other hand, while probably not wishing Israel’s demise, is someone I know from personal experience as hostile to “lib-Zionists.”

Finally, the dovish Israeli-Canadian academic and writer Bernard Avishai blogs against Israel’s rationale for attacking Iran.  While Avishai is powerfully logical, I don’t think this is about logic.  Unless we think that Netanyahu and Barak are lying (and I don’t think it’s fair to contend that they don’t believe their own arguments), Israelis genuinely fear the consequences of Iran going nuclear.  Mind you, the fear is refutable but not irrational.

What I don’t like about Avishai’s kind of argument is that he’s simply dismissing the fear.  I wish he’d acknowledge the fear and condemn Iran’s malicious adventurism before arguing against the march toward war.

The problem with Iran is that it’s doing all it can to destabilize the region, without taking the off-ramp repeatedly offered by the Europeans and Americans.  Instead, we get its off-the-wall president repeating his hateful, threatening statements, as he did the other day.