About a month ago I finally found the time to watch the acclaimed three-part documentary series, the Silver Platter (Magash Hakesef), which everyone in Israel had been talking about. Over a million people watched the series within a month of its release and before Channel 8 was pressured to take two of the three episodes off the web. The popularity of the series was surprising—particularly in mid-October and early November, when the media was entirely focused on terrorism. I was intrigued. The series reveals the real face of Israel’s Social and Economic Policy through the perspective of three experts: Guy Rolnik, founder of The Marker and deputy publisher of Haaretz; former Finance Ministry accountant general Yaron Zelekha, who suffered the consequences of his war against corruption in 2003-7; and economic historian Danny Gutwein, an expert on privatization.

Though I was impressed with the series as a whole, it was the third episode, Dani Gutwein and the Raiders of the Welfare State, that caught me off guard. In the installment, Gutwein argues that the Likud Party dismantled Israel’s welfare state using shock therapy and supported sectarianism in order to remain in power. Hyperinflation, which rose to over 400 percent in the early 1980s, was the Likud’s tool to destroy the union (Histadrut). In 1977, 80 percent of the Israeli labor force was unionized, now, in 2015, only 25% are. The struggle against the Histadrut caused factories closed and thousands to lose their jobs. But as long as the Histadrut was strong, the Labor Party had better chances of winning elections. The price was worth it. When instability reached the desired results, the national unity government began cutting state budget and privatizing the welfare state. After 1984 the Labor Party was a willing participant in this neoliberal destruction.

What was the result? Gutwein shows the concrete consequences neoliberalization had on education, heal 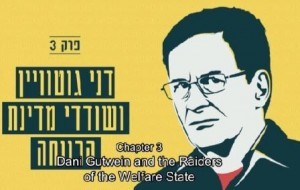 thcare, and transportation. State investment in healthcare is a third of the OECD average. Israel’s hospitals are consistently full with of beds occupied . The average Israeli kindergarten classroom has 27 children. The OECD average is 14. State investment in public transportation is 15% the world average. “Not in Europe,” Gutwein says, “the entire world including Asia and Africa!”

So why did the people who suffered the most under the Likud’s neoliberal policies continue voting for it?

Well, Gutwein offers two compelling factors. First, he argues that the government transferred the welfare state to the settlement project in the occupied territories. If the state invests 3700 shekels (approximately $1000) in the education of child in Dimona, it invests 24,500 shekels ($6,600) in an average child in Mount Hebron region. If an average class in Israel has 31.4 students, in the settlements an average class consists only of 21.7 students. The settlement of Beit El received 51 million shekels from the Settlement Division of the WZO, more than all the Negev and Galilee together.  No wonder that the number of settlers is constantly rising and settlers vote for the right wing. They get something in return for their political allegiance.

Present day Israel is in one of the most polarized periods in its history.  Even President Rivlin’s lamented of the lost “Israeli identity” and the growth of tribal identity.

“A child from Beit El, a child from Rahat, a child from Herzliya and a child from Beitar Illit — not only do they not meet each other, but they are educated toward a totally different outlook regarding the basic values and desired character of the State of Israel,” Rivlin noted, referring to Israeli towns and settlements featuring distinct demographic makeups.

The most common analysis of the last election was that the vote was tribal: “Tell me who you are and I’ll tell you what you voted.” Those marginalized in Israeli society, the Arabs, the Russians, the Mizrahi Jews, and the ultra-orthodox each supported their own tribal party. Mizrahi feminists even called to vote for Shas, a party that has no female representation in the Knesset, because they supported “a Mizrahi-based agenda, a Mizrahi leader and Mizrahi members of Knesset.” Everyone focused on difference and ignored the commonalities. In a much discussed televised debate before the election, Ayman Odeh, the leader of the Joint List, asked Arieh Deri to join forces. “Arieh Makhlouf Deri, who I represent are invisible. I agree with you. I represent the most invisible. I represent the unrecognized villages. I represent children two-thirds of whom are poor. We can build an alliance of the dispossessed against the privileged.” Deri shrugged and refused to recognize the common experience his constituents, Mizrahi Jews in Dimona have with their Bedouin neighbors.

If the rightwing profits from sectarianism, the Israeli left should learn from Chicago’s original Rainbow Coalition. Established in 1968 in the most segregated city in the United States, the Rainbow Coalition transformed into strong grassroots movement which embodied the intersectionality of the critical issues of race, class, gender, anti-war, student, labor, and sexuality. It fused these various forms of identity politics into one group with an identity that transcended differences and focuses on commonalities.

The Rainbow Coalition was a strong grassroots movement that clarified the issues, chose its own leaders, and united with as many people as possible. Only a grassroots approach will enable us to begin to dismantle the cloak over our eyes masquerading as leftist or progressive policy and politics.