So Why is it Important to Vote?

So Why is it Important to Vote?

So Why is it Important to Vote?
By Harlan Baker

“I don’t think I ever knew I could vote in the WZC.   I read the Hatikvah platform; it’s amazing to find a party with which I agree 100%”. This was one of the many responses to my letter asking for support for the Hatikvah slate in the upcoming World Zionist Congress elections which will be held from January 21st through March 11th. People I have contacted had no idea that they had a voice in the decision making process of the WZC. Even people in local Jewish community organizations had no idea this election was taking place.

In the late 1980s I had no idea either. My participation in the election came from an unusual source, Carl Shier a retired staff member of the United Auto Workers. He said he was going to vote in the WZC elections for the slate that included the Americans For Progressive Israel, and suggested that I do the same.  Then he added, “My grandfather, a Bundist, will be turning over in his grave”.

This year’s election may have a greater potential for influencing decisions made at the World Zionist Congress than ever before. The Hatikvah slate, a coalition of 11 Jewish Organizations has been conducting an outreach campaign to their members about the importance of this vote.  Hopefully we will be reaching more people who never thought they had a voice. Hatikvah is one of 13 slates that are vying for seats to the WZC.

So, why is it important to vote? Does my vote really count for anything? Will it change anything? The answer is “Yes”. It is important.  In 2015 there were 56,737 votes cast in the election. 3,148 were cast for the Hatikvah slate, winning 8 seats.  If we can triple that vote we could win over 20 seats and have a significant impact on the way the Zionist congress budget is allocated. This not only impacts the lives of Israelis has a profound effect on the lives of Palestinians as well.

Here is an example of how a strong progressive block can have an impact: the JNF funds for subsidizing settlements in the West Bank. If there are enough votes at the congress to prevent use of these funds that would displace Palestinians for settlement construction, then voting clearly makes a difference.

Another advantage  of having a strong progressive block would be an increase in support for the Jewish Agency programs that encourage co-existence between Israeli Jews, Palestinian Israelis, and other non-Jewish minorities.

In addition, by having more Hatikvah delegates in Jerusalem, it will be possible to form coalitions with other slates on specific issues we agree on.

I’ve voted in past elections. This year I decided to run to be a delegate. If I get people who know me but who have never voted before in these elections to vote, then my participation will be worth it.

As a former Democratic state legislator and current local Democratic committee officer, I’ve spent most of my adult life working on voter turnout. Many times I have encountered people who tell me they are not going to vote because they think it doesn’t matter.  My answer has been, “Not voting is a vote. By not voting you are ceding issues to people that will vote.”  For those of us in the progressive camp, we cannot afford to cede any more issues. 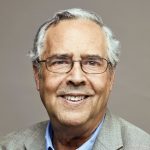 Harlan Baker lives in Portland, Maine and is vice chair of the Cumberland County Democratic Committee