Where we stand at the UN today

Where we stand at the UN today 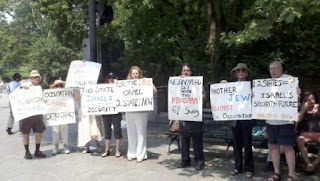 Because of events planned for this Friday at the United Nations, Partners for Progressive Israel is moving this week’s demonstration to the same street and day that Abbas and Netanyahu address the UN. Join us if you can, near the UN, from 12:30 to 1:30 PM, meeting at the northwest corner of 2nd Ave. & 41st Street, Manhattan.

This is our stand on the Palestinian application for statehood (abridged as follows from the statement published online):

… For the benefit of both the Jewish and Palestinian peoples, we urge the government of Israel to focus on the positive elements we expect to be contained in the Palestinian request, as outlined below, and to refrain from precipitous responses that would escalate tension and serve the agenda of both sides’ extremists. …

1. Non-violence: The Palestinian application is a diplomatic gambit, not a military offensive. It is imperative that this be the playing field on which the Israeli-Palestinian conflict is resolved.
2. Two-state solution reinforced: By referring to the 1967 lines as the basis for their state, we expect that the Palestinian application will reinforce the concept of the two-state solution, and weaken the idea, promoted by each side’s extreme elements, that one side or the other should dominate the entire area between the Jordan River and the Mediterranean Sea.
3. Recognition of Jewish rights to statehood: By hopefully incorporating a reference to UN General Assembly resolution 181, the international basis for Israel’s creation, the Palestinian move could serve to implicitly recognize the Jewish people’s right to national self-determination and statehood.
4. The 1967 lines will not be the final borders: We expect the Palestinian application to indicate that the pre-war 1967 lines will be adjusted in subsequent negotiations with Israel to take into account Israel’s security needs and some of the demographic results of its settlement policy. … with negotiated land swaps….

We urge Prime Minister Netanyahu and his government not to waste time, and to engage with the representatives of the Palestinian people on the basis of these principles. …

Hopefully, the United States will pay a positive role in helping the parties move from confrontation to the resolution of their conflict. In this connection, it’s worth noting President Obama’s sensitive and moving words in his speech before the UN General Assembly on Sept. 21:

Peace will not come through statements and resolutions at the United Nations.

Let’s be honest: Israel is surrounded by neighbors that have waged repeated wars against it. Israel’s citizens have been killed by rockets fired at their houses and suicide bombs on their buses. Israel’s children come of age knowing that throughout the region, other children are taught to hate them.

Israel, a small country of less than 8 million people, looks out at a world where leaders of much larger nations threaten to wipe it off of the map. The Jewish people carry the burden of centuries of exile, and persecution, fresh memories of knowing that 6 million people were killed simply because of who they are.

Those are facts. They cannot be denied. The Jewish people have forged a successful state in their historic homeland. Israel deserves recognition. It deserves normal relations with its neighbors. And friends of the Palestinians do them no favors by ignoring this truth, just as friends of Israel must recognize the need to pursue a two-state solution with a secure Israel next to an independent Palestine.