What do you need to do to win free millions from the state of Israel?

What do you need to do to win free millions from the state of Israel?

Meretz posted on Facebook a response to the Israeli government’s decision to rebuild the Givat Ze’ev synagogue in another location with the taxpayers’ dime:

Ask Yourself: What do you need to do to win millions of shekels from the state of Israel?

If you answered “5,” congratulations! You are on the right path to millions. If not, you will have to continue playing the lottery.

The Ministry of Treasury allotted 5.2 million shekels for the reconstruction of a new synagogue in Givat Ze’ev, to replace the synagogue that had been built on private Palestinian land and the High Court ruled should be demolished.

What are the “special circumstances” the state used to justify this act of bribery (there is no other word) of bullies who threaten terror if they don’t get their way? Why do they deserve this award? Or is it Chief Rabbi Eliyahu who called on Israelis to “seek out these judges and make their lives miserable?” The only way to understand the farce of the Givat Ze’ev synagogue is that the government surrendered to threats of “price tag” gang violence. And we, the citizens of Israel, have to pay the economic and moral price.

Indeed, the synagogue in Givat Ze’ev, just north of Jerusalem, was built on privately-owned Palestinian land. The Israeli Supreme Court ruled for its demolition in 2012. Since then the settlers have successfully postponed the demolition order. 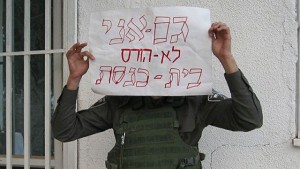 “I too will not demolish a synagogue” from the Facebook page of rebelling soldiers.

The violent rhetoric of opponents to the demolition has recently escalated: Rabbi Shmuel Eliyahu, the Chief Rabbi of Safed and therefore a public employee, declared that the demolition of the synagogue “would be a terrible black mark on Israel – as bad as burning a Torah scroll;” The outer wall of the Supreme Court building in Jerusalem was defaced with graffiti saying “You don’t Demolish a Synagogue. We want a Jewish State;” and soldiers opened a Facebook page called I too will not demolish a synagogue.

As a result the government decided to “punish” settlers for building an illegal structure on private Palestinian land with public funds to build another “legal” synagogue on what the international community considers an “illegal settlement.”

So ask yourself: What do you need to do to win millions of shekels from the state of Israel?