‘Warning: This Article Is Illegal’

‘Warning: This Article Is Illegal’ 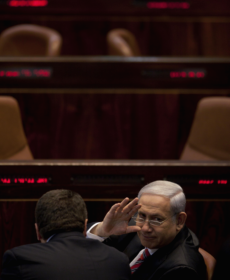 …. The Prohibition on Instituting a Boycott Act was submitted by Zeev Elkin—a West Bank settler and Likud politician who chairs the ruling coalition in Israel’s parliament. On Monday night, the Knesset passed the Boycott Act on a straight party-line vote, with the 47 members of the coalition and a far-right opposition party voting in favor, and the 38 members of center and left-wing opposition parties voting against.

…. [P]ublicly organizing or even supporting a boycott is grounds for the boycott’s target to file a civil suit, and for a court to award punitive damages even if the plaintiff doesn’t prove actual financial harm.

… The phrase in the law referring to “an area under [Israel’s] control” is a very thinly-veiled reference to the West Bank. The phrase is there to outlaw boycotts of Israeli settlements in occupied territory. …

This is a pernicious law. The future of the West Bank and of the Israeli settlements in that territory is Israel’s single most important political issue. The Boycott Act attacks one form of free expression used by citizens to take a stand on that question. The act also attacks the right to organize, and the right of citizens to act as free agents economically. Defining the supposed offense as a civil tort does not soften the blow. Individual settlers, settlement organizations and local governments can file suit against opponents, keep them tied up in court for years, and punish them with legal costs even before a verdict.

The law, however, … has forced centrist politicians who do not themselves support the tactic to defend other Israelis’ right to use it. And it has pushed groups and individuals who had have avoided buying settlement products in a low-key fashion in the past to promote a boycott explicitly. The day after the bill passed, thousands of people joined the Peace Now movements’s Facebook campaign to boycott settlements. …

… I’m among the label-checkers. If I know that a bottle of olive oil or a box of crackers comes from a settlement, I don’t buy it. I encourage my friends not to. I’ve urged my synagogue in Jerusalem not to. …

And … I should stress that I oppose boycotts of Israel as a country. … Boycotts and sanctions aimed at Israel as a whole convey a message that the country’s very existence is the problem. Aimed at military suppliers, they imply that Israel has no legitimate need to defend itself. Politically, those methods create a siege mood that encourages Israelis to put aside their own criticisms of their government. The academic and cultural boycott popular among some faculty-room radicals abroad is particularly foolish, targeting precisely those sectors of Israeli society that have done the most to raise questions about the occupation. But if there’s anything more ill-considered than such shotgun boycott campaigns, it’s the idea that the Knesset can legislate them out of existence. …

One can read this entire article online at The American Prospect website.