The Tinderbox
By Marcia G. Yerman

With a shift in American and Israeli leadership, the armed hostilities between the Israeli government and Hamas in May, and street riots within mixed Israeli cities, Diaspora Jews are beginning to question the traditionally accepted narratives.

Into the fray the fray has stepped Gillian Mosley, a British-American and Jewish film director. Her documentary, “The Tinderbox,” follows her journey of exploration and self-discovery as she digs into the historical antecedents of the Israel-Palestine conundrum—while interviewing those living through the on-the-ground daily reality.

At stake is the idealistic version of the founding of the state of Israel.

Raised in a Zionist home, Mosley has famous rabbis and cantors throughout her family tree. Her ancestors were Sephardic Jews from Spain and Italy. Her Ashkenazi German antecedents arrived in England in the early 1800s, where they changed their name from Moses to Mosley. While in production, Mosley discovered that she had British relatives who played a role in the 20th century history of Israel/Palestine, including Sir Herbert Samuel, the first British High Commissioner of Palestine. 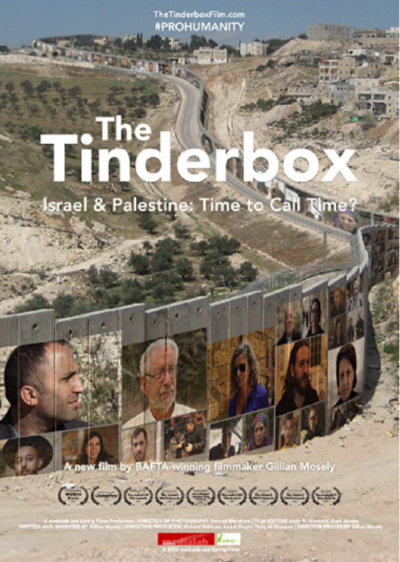 After two years making the film, Mosley portrays it as teasing out facts from emotion. She quickly discovered that she is deep into “very murky territory.” As Mosley explains, the one true constant throughout her physical and emotional voyage is that everyone she interviews “believes they are right.”

Mosley’s exchanges include in-depth dialogues with Arab and Christian Palestinians, a settler, a progressive Israeli musician, and the widow of a Hamas member. There are also short “on-the-street” style conversations that reveal attitudes from various stakeholders, often ideologically opposed.

Early in her filming, Mosley realizes that she will encounter uncomfortable realities but doesn’t shy away from what unfolds. As she encounters painful situations that make her uneasy, she shares her distress with the audience. At one point, she states, “I want to believe Jews are better than this.”

The viewer follows Mosley through her evolving concerns. She steps back from her original premise of delving into “Who does the land belong to?” when she decides to reexamine the premise with, “Is that the right question to ask?”

Using archival footage, Mosley underscores the role of the post-World War I colonial powers, specifically the impact of Britain’s actions. While anticipating carving up the lands of the Ottoman Empire, Germany’s ally in the war, Britain was promising Arabs their independence while simultaneously cultivating Jewish financiers. There was much dissension within the British ranks—specifically Lord Curzon’s opposition to the Balfour Declaration. Yet Britain’s self-motivated global interests in Palestine superseded all the mitigating factors. The result was a legacy of competing claims of sovereignty.

Two decades earlier, Theodore Herzl had recognized an opportunity to formulate his conception of a homeland for the Jews as the only viable option and response to centuries of European anti-Semitism. Ironically, as Mosley points out, many European countries saw “Zionism as a way to get rid of their Jews.”

Numerous historical figures appear in the storyline—some better known than others. Khalil al-Sakakini, the Christian Palestinian who in 1917 called for the independence of his people, is introduced. The British Palestine Mandate was legally constituted 1922.

Of course, Jewish actors also play major roles. Ze’ev Jabotinsky calls for “sweeping out all traces of the Oriental soul.” Yet dating back to 1891, Ahad Ha’am, a Jew from Kyiv in Ukraine originally named Asher Zvi Hirsch Ginsberg, observed while in Palestine that the Jewish behavior toward the land inhabitants was “hostile.” He wrote that the Jewish settlers treated the Arabs with a “repressive tyranny.”

When listening to people referencing promises outlined in the Old Testament as if it were a “land deed,” Mosley asks rhetorically, “How can you use the Bible as a document of proof?” One American Orthodox woman asserts that her realizations come from the Torah and that it is “the will of God for Jews to live in the land of Israel.” For Yisrael Medad, originally from New York, his deeply held belief is an existential one—that “without the land of Israel, we are nothing.”

Mosley reflects, “Do we want peace enough to stop the blame game? Is it possible to listen to the Other? Is there the will for all parties to take collective responsibility?”

There is anger and calls for reconciliation. A Christian Palestinian (a group now reduced to only two percent of the present-day Palestinian population), Muna Tannous, reminds us that, “Christians have been here for over 2,000 years.” She adds, “It’s land they’re after, not peace.” Her weariness is evident in her simple declaration, “I just want to live.”

Kobi Farhi, a Jewish musician from Tel Aviv/Jaffa and founder of the well-known Israeli band Orphaned Land, reflects soberly, “What’s so holy if blood is spilled all over the place?”

Issa Amro, a prominent Palestinian human rights activist based in Hebron, struggles to effect change through non-violence. He is the founder of Youth Against Settlements and was found guilty by an Israeli military court for an assortment of charges earlier this year. Like many Palestinians, he articulates a palpable feeling of “no future” and a lack of hope.

Mosley includes an unvarnished look at the 1948 Nakba, the moves toward population transfer, ‘right of return’ questions, and the dismal living conditions for Palestinians in Gaza. She and her camera bear witness to the demeaning checkpoint culture and the colossal separation wall erected to keep people separate.

While she was recently in the United States, Mosley met with me for an interview.

“I’m speaking to the center ground,” she emphasized. “I made the film for millions of people who don’t understand. To understand is to increase the number of voices in the conversation. People will have to look again.”

Acknowledging that the response from some Jews was not positive, she told me, “I was screamed at for undermining the Jewish myth and told, ‘You’re not helping the cause.’” Some Palestinians said it was the film “they had been waiting for.” Others believed that their community wouldn’t watch it.

Mosley’s purpose is not to present a solution. Her mission is to show what has happened and continues happening in the land of Israel/Palestine. The Tinderbox website offers a robust set of verticals which presents resources, historical references, and tools for how to “Achieve a Just and Lasting Peace in Israel/Palestine.”

The Partners for Progressive Israel-Palestine Symposium 2021 will feature “The Tinderbox” as a pre-Symposium feature. All attendees who register prior to July 5 will receive a link to watch the film which will be available from Monday, July 5 to Saturday, July 10. There will be an interview/Q&A with the director, Gillian Mosley, on Thursday, July 8, at 12:30pm ET. 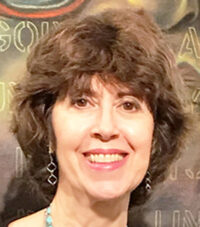