“I know that most Gazans want the same things that I do: safety for their children, food on their tables, and to enable their children to have a horizon of hope. I have that horizon, because I’ve seen it… I’ve even had the chance to hug a Gazan woman who lives on the other side of our border from my home … while taking part in the women’s leadership program run by the Geneva Initiative.”

These words from Adele Raemer, a community activist and a resident of a kibbutz near Israel’s border with Gaza, were part of her address to the UN Security Council in December 2019. Adele is an alumna of our Women and Leadership Project. The program brings together diverse Israeli and Palestinian female leaders from the security establishment, the media, academia, the business sphere, cultural institutions, and civil society in a conversation around peace and reconciliation. Together they share narratives, explore notions of transitional justice, learn the language of reconciliation, and foster meaningful understanding about the past.

In parallel, our Ramallah-based branch carries out dozens of activities with female leaders from across the West Bank and the Gaza Strip. The workshops offer the women skills and knowledge to help them overcome the barriers to political participation and include discussions on the importance of internal reconciliation and Palestinian national unity, as well as the alternatives to unilateralism.

As women in both societies continue to be marginalized from the discussion around the conflict, our activities expose the unique perspective that female leaders can bring to the public discourse and offer participants the concrete skills needed to become agents of change, within their communities and beyond. 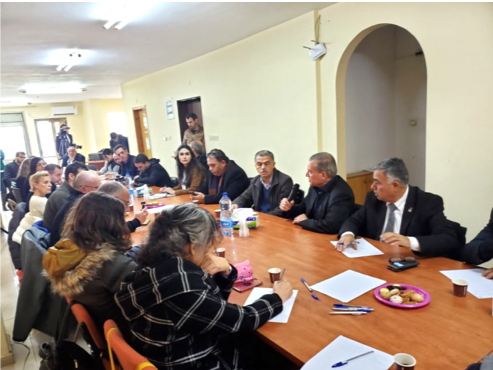 These projects are just two examples of our many actions that generate the much-needed dialogue about peace and resolving the conflict. Our approach is guided by the importance of highlighting bilateralism over unilateralism, tolerance over misunderstanding, and trust over fear. We aim to show that agreed-upon solutions to all the core issues exist, that there is a willing partner for peace on the “other side,” and that peace is not an unattainable dream – it is tangible and within reach. In all of our activities, the participants analyze political developments and learn the arguments in favor of the two-state solution from various experts and former negotiators. During the process, they break down the barriers to communication, dispel the misconceptions that existed prior, and form relationships that enrich their professional spheres. We provide them with the skills to expand their influence in both Palestinian and Israeli societies and equip them with knowledge in support of a permanent-status agreement. We strive to show that peace should be pursued not only by leaders seeking political agreements – that peace between people is just as transformative.

The Geneva Initiative was established in 2003. Following years of negotiations, during a surge in violence amid the second intifada and when hope of reaching an agreement was waning, the model peace treaty known as the Geneva Accord was born. Drafted by leading figures in Israeli and Palestinian society and spearheaded by former Israeli Justice Minister, Dr. Yossi Beilin, and former Secretary-General of the PLO Executive Committee, Yasser Abed Rabbo, this agreement proved that the gaps between the two sides were, in fact, bridgeable. It offered comprehensive solutions on all of the core issues with unparalleled detail. Since its inception, the Accord has served as a blueprint for ensuing negotiations and has set the parameters of the zone of possible agreement between the two sides. The situation on the ground may have changed since 2003, but the agreement to this day functions as the benchmark for reaching a realistic two-state solution. In a nutshell: if you want a solution, you can find it.

Based out of Ramallah (where we’re officially the “Palestinian Peace Coalition”) and Tel Aviv (our official nonprofit name in Israel is “H.L. Education for Peace”), our work at the Geneva Initiative continues in the spirit of the Accord and aims to build support for the two-state solution in both societies. Together, Palestinians and Israelis, we strive to end the conflict by engaging in bilateral peacebuilding efforts that can eventually feed into a broader negotiated political settlement. Through workshops, seminars, conferences, joint meetings, online sessions, and tours, we engage diverse audiences from across the political spectrum and from geographically diverse locations in the difficult conversations. We aim to prepare both sides for the very real compromises needed to reach an agreement, clarifying the high price that the continuation of the status quo inflicts and emphasizing the benefits that the peace dividend can bring for all. 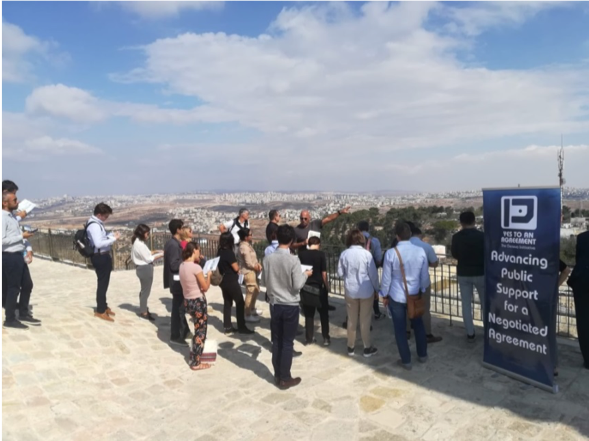 When polls show trends of growing despair among the youth, we organize workshops offering them leadership skills and in-depth discussions about peace and reconciliation. When political leaders sow incitement and division, we bring together influencers on both sides, to speak candidly about the issues that matter most for our future. Through our activity, we have established special cohorts of politicians, leading women, senior journalists, community activists, and young activists who have, and will continue to, impact both societies in the years to come. Among the graduates of our programs are current and former ministers, members of the Knesset from various parties, mayors, leading figures in the Israeli security establishment, ultra-orthodox community leaders, Arab-Israeli political activists, well-known filmmakers, novelists, social media influencers, and more. Every day we do something to carry forward the message that peace is possible, that the two-state solution remains the best alternative, and that this is not a minority view.

Amid the ongoing threat of annexation, our work to promote the cause of bilateralism over dangerous unilateralism has become increasingly vital. Our Two-State Coalition (an umbrella of 22 Palestinian and Israeli pro-peace organizations that we established two years ago) has spearheaded our grassroots efforts. Through public outreach, joint initiatives, local advocacy, opinion polling, and social media campaigns, we seek to amplify the voices of the majority that support a return to negotiations. Our recently launched anti-annexation campaign targeting the Israeli public earned us praise for injecting new life into the debate on the two-state solution. Our video clips and newspaper adverts were described as restoring the issue to the agenda after years of indifference and were lauded for effectively challenging the pessimistic discourse.

Our other activities to prepare the groundwork for the two-state solution continue in full force. We are, for example, currently formulating a multilingual Reconciliation Handbook that will guide young Israelis and Palestinians through the sensitive elements of the conflict and offer them a tool for rejoining the conversation. In the West Bank and Gaza Strip, we focus our efforts on female and youth participation, with various actions that aim to educate and activate these groups in support of the two-state solution. In Israel, we hold weekly sessions with activists from the Russian-speaking community, which makes up a sizable and influential segment of the population, in order to provide them with training to take an active role in peace promotion efforts. Alongside this, we formulate policy papers and publish a monthly Two-State Index, a tool which assesses the viability of the two-state solution based on monthly political developments. Our engagement with the international community, which includes providing analysis and briefings on how to reignite a political process, is also a critical pillar of our work.

Amid growing attempts to delegitimize the two-state solution, our deep conviction that it is the only outcome for ending the conflict remains resolute. Despite an absence of peace talks for more than six years, challenging political circumstances, and declining levels of optimism, all opinion polls show that the two-state solution remains the option for ending the conflict most preferred by a plurality of Israelis and Palestinians. The problem lies in the fact that both publics have lost belief in its achievability due to the diplomatic vacuum that has arisen. That’s where we come in. We at the Geneva Initiative will continue to educate, motivate, and build the necessary bridges. To us, the choice is obvious: Two states for two peoples is the only way to achieve the future of peace, security, and freedom for all. We will not give up. We hope you can join us on the journey to bring this day closer. 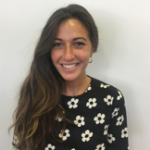 Jess Manville is the Director of Foreign Relations at the Geneva Initiative.