The death of Eritrean baby: Can’t we learn from Passover?

The death of Eritrean baby: Can’t we learn from Passover?

A four-month-old baby, the daughter of two Eritrean asylum seekers, died on Friday in what seems to be a case of neglect at a makeshift day care center in south Tel Aviv. The baby who was left in a crib with a bottle of formula died of asphyxiation.

There is nothing new here. Since February, five infants and toddlers have died in unlicensed and unsupervised day-care centers, also referred to as “warehouses,” which are run under the loose if not totally absent supervision of the state. There are some 2,500 children under the age of three and 1,500 children ages 3-4 in these single room institutions, with one adult per 40 children on average. The children spend most of their days in extremely overcrowded cribs.

I cannot grasp this terrible thing. Here in our country, a mere ten-minute walk from the cafes of Rothschild, babies die of neglect. And the authorities know. They know that there are barely any nannies and most lack basic training. They know that little babies lie in their cribs for days without anyone talking with them, let alone hugging them. They know that the conditions are hazardous and infants and toddlers are at risk of death. Everyone knows – the welfare departments, the city, the Economy Ministry, the Ministry of Internal Affairs and they do nothing except for passing the buck.

Gal’on blames the authorities. And so she should. As Or Kashti wrote, Israel ratified the United Nations Convention on the Rights of the Child in 1991 and took a responsibility to protect all children “without discrimination of any kind, irrespective of the child’s or his or her parent’s or legal guardian’s race, color, sex, language, religion, political or other opinion, national, ethnic or social origin, property, disability, birth or other status.” The Convention also demands that all countries “ensure to the maximum extent possible the survival and development of the child” and to take responsibility for setting proper standards for institutions that care for children – especially “in the areas of safety, health, in the number and suitability of their staff, as well as competent supervision.”

But while we can and should criticize the state of Israel for failing to comply with its commitments, the responses on Zehava Gal’on’s Facebook post say it all. Most of the commentators argue that Gal’on cares for the Africans ‘Infiltrators’ more than Jews. “Last week a woman was raped in South Tel Aviv. Where were you then?” asks one person. “You are right, Zehavale,” writes another, “in the meantime, take some (children) home until we find another solution. In fact, if every one of your party’s supporters takes a child or two, we will solve the problem. We don’t have the money or desire to fund illegal immigrants.” 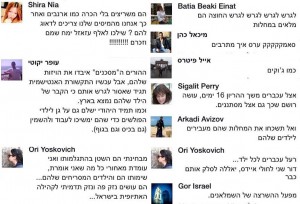 Elsewhere, Israelis responded to the death of a four months old baby: “Deport, deport, deport, they are disease-ridden.” “They reproduce like cockroaches” “Mice have a 16 day pregnancy. It seems the same is true about infiltrators.” “Don’t forget the disease they pass on to their kids.” “Mice poison for each child… Second generation of AIDS, get rid of them already.” “The reproduction factory of leftists.” “They reproduce non-stop like rabbits and then we have to take care of them from our tax money? May their names and memory be blotted out.” “The ‘poor’ parents lost their visas, but now the anti-Semitic media will say that they cannot be deported because their child’s grave is in Israel. And as always the Jew will pay also for the invaders’ children’s day care so that they could continue working and getting fat.” “As far as I am concerned they are the devil and I stand behind what I say, let them and their stinky children die… They destroy the reputation of the Ethiopian community in Israel.”

Israelis’ racism will never cease to astonish me. Particularly on the eve of Passover, when we remember the time we were slaves in the Pharaoh’s land. Rabbi Jill Jacob writes:

Remembering the experience of slavery obligates us to care for those whom society neglects. […] Going a step beyond the Torah’s insistence that the Jewish people remember the experience of slavery, the Hagaddah demands that “in each generation, each person is obligated to see himself or herself [lirot et atzmo] as though he or she personally came forth from Egypt.”

How could Israelis, who learn the Holocaust in and out, refer to people as cockroaches, mice and other vermin?

But let’s leave the moral outrage aside for a minute. Mickey Gitzin a Tel Aviv Meretz councilman implied that racism is the cause of neglect. “The Economy Ministry is afraid of touching the issue because it does not want to be blamed for working on behalf of foreign children.” Thus the state of Israel is failing to comply with its legal obligations because politicians who want to be elected again cannot be seen as soft on refugees.