The Coming End of the Israeli Experiment

The Coming End of the Israeli Experiment

A couple of days after arriving in Israel, I realized something was different; My friends and family were all ready to pack their bags and leave. My best friend jokingly told my partner, “When the time comes, you will divorce her and marry me.” My aunt, though desperately missing her son who lives in the United States, told me she was happy he was starting a family “there” and not “here.” At some point I was at a large dinner party in which everyone agreed that “the experiment called Israel is going to end.” They merely disagreed on how and when. The most optimistic gave it fifteen years. The pessimistic, five.

As if to echo my perceptions, Tahel Prosh wrote in Haaretz a piece titled in Hebrew, “How do you know when it’s too late to leave?” The English title is different. In it, she describes her grandfather’s emotional relationship with a packet of old letters from his family before the war, in which they begged him to rescue them from Germany and get them a passport to Palestine. He tried his best and failed. It was already too late to leave. Prosh wonders whether she would know when it would already be too late leave Israel.

At the end of the piece, seeking reasons to stay in the country, Prosh refers back to a list she had run across on a website written by and intended for teenagers: “64 Reasons to Stay in Israel”

The list’s author explained that she had compiled it because it bugged her that her friends talked about leaving the country. Among the reasons to stay she wrote:

“Because we don’t have curfew; when there is a war we are all united; because it is very hard to obtain citizenship in other places; because Israel is the only place where you can drive a tank at the age of 18; because only in Israel we’re all brothers.” And she also wrote: “Because the Land of Israel is beautiful and flourishing; because the climate is pleasant in every season and because there is no place in the world like the promenade in Tel Aviv.”

Imagine the teenage girl so frustrated that her entire world is collapsing. Everyone around her speaks of leaving, and she needs to imagine a future elsewhere, speaking a language she probably doesn’t know very well. She sits in her room and writes this list for Israel’s Independence Day. And the result is so very unconvincing, somewhat pathetic, and even sad. 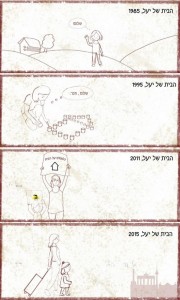 It isn’t so much that people I talked to were afraid for their own safety. The threat of terrorism is not a push factor. It is rather a sense of despair that brings about what I would call a mystical eschatology. People feel things are getting continuously worse and have come to believe that it somehow must end. It simply cannot continue. Most of my friends feel they have no control over the political reality and don’t believe the next election will make things better. Instead, they deeply believe something cataclysmic will bring it all to a crashing end. The Freudian death drive is superimposed on the entire nation.

When I asked what would cause the end of the Israel-experiment and about the inevitable doomsday scenario everyone was referring to, people gave multiple answers. Some of my liberal friends argued that the Occupation simply cannot continue. The Israeli public has been refusing to see that it is resting on the barrel of explosives that could erupt at any moment. This feeling gave additional zest to the recent violence. It proved the liberal argument that we cannot keep millions under occupation and expect to get away with it.

Others believed that ISIS would be Israel’s doom. “There is a civil war ravaging a country less than a hundred miles from here!” they told me.

Of course, all three explanations are evidence-based and fairly reasonable. The combination of the three with a deep sense of despair and lack of agency turn them into what I consider a mystical eschatology. But this is eschatology with a twist — while in the final battle, the forces of good will fight the forces of evil and the righteous will be victorious, in Israel today, those who consider themselves good are opting to quit the battlefield and save their skins. This is the true danger to the experiment called Israel.