The Americanization Project in Israel
By Thomas Mitchell, Ph.D.
A review of The Unmaking of Israel By Gershom Gorenberg (HarperCollins, 2011 $26.00)
The Israeli Left has been divided, at times, over whether to emphasize the Palestinian problem or religious coercion. In his latest book, American-Israeli journalist Gershom Gorenberg, who is himself a practicing modern Orthodox Jew, links the two issues. His basic theme is that Israel is threatened by anachronistic elements in Zionism, an argument made previously by Bernard Avishai in his first book, The Tragedy of Zionism.

Both contend that Israel as an independent state should not behave like a national liberation movement. The settlement project in the West Bank is a state effort carried out as if it were still the late 1930s or the late 1940s and the religious settlers were setting the boundaries of the state as the Labor Zionists did in the “tower & stockade” period. 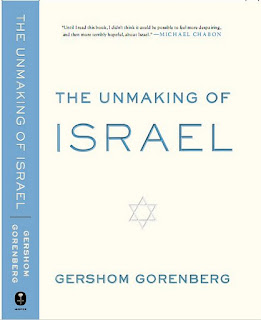 The core of Gorenberg’s book is about the settlement project on the West Bank and how it threatens Israeli democracy and survival. From there he goes to examining how the settlers have established a presence in the IDF and threaten it as the Etzel (a/k/a Irgun) threatened the newborn state in June 1948 with the Altalena incident (he skims over a similar perceived threat from the Palmakh). Gorenberg makes a good case that, as presently constituted, the IDF will be unable to carry out an order to evacuate settlers from West Bank settlements in the event of a peace agreement with the Palestinians.

Next he relates how the ultra-Orthodox sector conned the state into funding a parasitic lifestyle for its members that dooms them to a life of poverty but ensures their loyalty. He then ties this phenomenon to Israel’s dysfunctional electoral/party system and to the gentleman’s agreement among Zionist and religious parties to exclude the Arabs from government. He relates how Rabin was willing to have the Arabs as a publicly-acknowledged “mistress” in 1992 but was unwilling to “marry” them. Secular Jews could safeguard themselves from religious coercion if they were willing to cooperate with Arabs. But old habits die hard.

Gorenberg’s penultimate chapter is on the danger of making all of Israel into a battleground as settlers move back into Israel and carry on as if it were the West Bank. He makes a good case for Israel devolving over time into a pre-state Palestine of the 1936-48 period where there is strong intercommunal tension. In the final chapter, he rejects the one-state solution for this very reason. In that chapter, he rests the salvation of Israeli democracy upon a two-state solution.
But is a Western-style democracy as opposed to an ethnic democracy or ethnocracy enough of a priority among enough Israeli Jews to motivate them to make the necessary compromises to reach a two-state solution? And even if the answer to the previous question is yes, is there a similar critical mass of Palestinians willing to make similar compromises?
Gorenberg’s critique is basically an outsider’s look at Israeli democracy based on inside knowledge. Some ninety percent of Israeli Jews originate from countries that weren’t democratic at the time of emigration—Eastern Europe, Nazi Germany and the Muslim countries. Those from successful democracies such as the U.S., Britain, and France are the exception. And many of those from the U.S. are settlers who support religious Zionism.
Gorenberg wants to Americanize Israel. But he forgets that for America to become the liberal democracy of today it had to start out with a base of English freedoms, and it still took two civil wars (the 18thcentury Revolutionary War and the 19thcentury Civil War) to achieve! Israel’s compromise with Orthodox Judaism (the “status quo agreement”) is its equivalent to America’s compromise with slavery. Ben-Gurion compromised with the religious establishment in order to win its blessing for statehood. The North compromised with the South in order to win the necessary critical mass to safeguard independence from Britain. It then took another ninety years and a second civil war to rid America of slavery and another century after that to win civil rights for blacks. As most American Jews know, Jewish standard time runs slower in the Middle East than in America.
Thomas Mitchell is an independent scholar and blogger on a number of subjects, including Israel and its conflict with the Palestinians.  He blogs at the Self-Hating Gentile.
By partnersblogmaster| 2011-11-30T16:18:00-05:00 November 30th, 2011|Blog|0 Comments