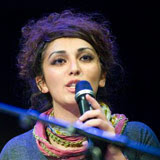 On Oct. 22, New York’s New School hosted a fascinating talk, sponsored by Dissent magazine, between the writer, feminist and left-wing activist Meredith Tax and Kurdish activist Dilar Dirik, a doctoral student at the University of Cambridge in England. (Ms. Dirik’s writings can be found on her blog.)  For more background, read Ms. Tax’s April 2015 Dissent article on “Rojava” (as the Kurdish region of northern Syria is known); click on its title: “The Revolution in Rojava.”

Tax informed readers that it was Syrian Kurdish fighters who crossed into Iraq to rescue the 50,000 Yazidis cornered on a mountain by ISIS. Also news to me is that although most Kurds are Sunni Muslims, the Yazidis are Kurds who practice a religion that predates Islam.

There are about 40 million Kurds divided among Turkey, Iraq, Iran and Syria.  The largest group are Turkish Kurds, of whom Dirik is one.  The Kurdish Regional Government in Iraq, which Dirik disdains as capitalistic and corrupt, is conducting an economic blockade of Rojava.

The dominant political influence among the Syrian Kurds, according to Tax and Dirik, is the radical Kurdish movement in Turkey, the PKK.  Its long-imprisoned leader, Abdullah Ocalan, has undergone an ideological transformation from Marxist-Leninism to a kind of communitarian anarchism inspired by the writings of American anarchist Murray Bookchin, “world systems theorists” Immanuel Wallerstein and Fernand Braudel, and social scientist Benedict Anderson.

What Dirik described as happening on the ground in the autonomous Kurdish enclaves in northern Syria, with women’s empowerment, cooperative enterprises and decisions made via community-wide voting, reminded me of Israeli kibbutzim, moshavim and worker-owned cooperatives — especially during the most experimental times in the pre-State Yishuv.  Israeli socialism was closer to anarcho-syndicalism than state socialism, but David Ben-Gurion was very much a “statist,” perhaps out of necessity, and Israel has developed very differently than the “one big kibbutz” or confederation of autonomous communities as envisioned by some early left-Zionist theorists. Today, most kibbutzim and moshavim are pleasant communities that have been basically absorbed into a corporate economic culture, with mere remnants remaining of their original collectivist ethos.  And the degree to which Israeli women actually were empowered was very limited, to say the least.

Tax elaborated in her article on the theoretical basis for the Rojava “revolution”:

[Ocalan] publicly disowned his previous beliefs in democratic centralism and armed struggle, writing in 2008 that a state-like hierarchical party structure was a contradiction to “principles of democracy, freedom and equality;” he also distanced himself from the PKK culture in which “War was understood as the continuation of politics by different means and romanticized as a strategic instrument.” Ocalan was similarly critical of nationalism and the goal of a Kurdish state, arguing that nation-states were intrinsically hierarchical and that the goal instead should be a confederation of Kurds and other peoples living in the region. The idea was that Kurds should withdraw their energies from their respective states and develop their own democratic economies and methods of self-governance—anti-capitalist, anti-statist, and environmentally sound.  …

There is a Syrian (mostly Kurdish) political party, the PYD, that is inspired by Ocalan, and viewed with hostility by the Turkish state as an extension of the PKK.  Its two militias, the YPG and YPJ (the latter being the women’s force) are perhaps the most effective anti-Assad, anti-ISIS fighters in Syria.  In her article, Tax indicates some concern about a possible cult of personality around Ocalan, which I sensed in Dirik to some extent, but overall Tax sees the Rojava experiment as a hopeful development:

. . .  [T]he PYD (Democratic Union Party) was founded by Syrian members of Turkey’s banned Kurdish party, the PKK. By January 2014, they had established a bottom-up system of government in each canton, with political decisions made by local councils and social service and legal questions administered by local civil society structures under the umbrella of TEV-DEM (Democratic Society Movement). TEV-DEM includes people from all the ethnic groups in the cantons, who are represented by more than one political party, but most of its ideological leadership comes from the PYD.

The one area where I really disagreed with Dirik was when she addressed questions about an Amnesty International report charging Syrian Kurdish forces with “ethnic cleansing.”  She ridiculed the report, but defended Kurdish actions to remove people from combat zones as necessary. This may even be true, but she denied that forcibly removing people actually is “ethnic cleansing,” which she confused with genocide.  She did confirm Tax’s article on the inclusive nature of the PYD in governance.

And I’m with Dirik in defending against the criticism from someone in the audience, that in welcoming US air support, the Syrian Kurds ally themselves with “American imperialism.”  Dirik’s overall stance is similarly suspicious of “imperialism,” but I see this as a vestige of the Leninism that they’re evolving from.

Unfortunately, Turkey has launched air attacks on the Kurdish forces fighting ISIS today. It’s similarly unfortunate that the AKP party of Turkey’s President Recep Tayyip Erdogan has been victorious, with nearly 50% of the vote, in the recent election.  After the talk, I chatted with a Turkish gentleman in the audience, who supports the Kurdish-majority political party in Turkey as a force for multi-ethnic and secular reform.  In a recent column, Roger Cohen writes that the AKP “took 317 seats, enough to govern alone, against 258 five months ago. … the Kurdish-dominated People’s Republic Party, or H.D.P., lost votes …”

My hope is that Rojava succeeds, and I want to believe in a fundamentally different model than corporate-dominated economies and political cultures.  But I’m too conscientious a student of history to be very optimistic.