In “How The World Turned Against Israel,” NY Jewish Week editor & publisher Gary Rosenblatt reports on his interview with Joshua Muravchik, who has just published his eleventh book, Making David Into Goliath: How the World Turned Against Israel (Encounter Books). Muravchik is someone I’ve known since college days, when we both were students at CCNY, and he served as national chair of the Young People’s Socialist League (the old Socialist Party’s youth group), which I eventually joined.  In his adult career, Josh earned a doctorate in international relations and has basically been a think-tank intellectual, previously with the American Enterprise Institute and now at the Johns Hopkins University School of Advanced International Studies. 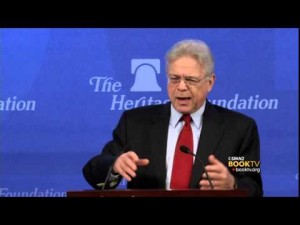 As a YPSL, he was a follower of ex-Trotskyist Max Shachtman, who became a key influence in the Socialist Party in its final years, and may be regarded as a source of inspiration for some of those known as neoconservatives in the 1970s.  I was impressed by Shachtman for his strategic vision on achieving social change  — i.e., by making the Democratic party into a European-style social democratic party, more closely allied with labor unions than it is now.  But I also found Shachtman and his disciples too rigid and calculating in their thinking (this links to a piece I wrote on Shachtman and neoconservatism nearly ten years ago); it’s almost as if they were anti-Stalinist Bolsheviks (an appropriate pairing of terms, since Shachtman was originally schooled by Trotsky).  Josh became associated with neoconservatism, a label he deplores but fits.

His basic thesis is that the left (loosely defined) largely supported Israel until the Six Day War of 1967, when it ceased to see Israel as the underdog, and came to define it as an occupier and oppressor.  Therefore, Josh doesn’t regard this turn as anti-Semitic, but does view it as unfair.

Josh says he does not support expanding settlements, but sees Palestinian obstinacy as more of a problem (or at least equal to Israeli shortcomings).  Somewhat to my surprise, he characterizes Begin’s invasion of Lebanon in 1982 as a “disaster.”

Still, he sees Abbas as uncompromising on refugees, and Pres. Obama as unfairly siding with the Palestinians against Israel.  He also views Iran as an enduring threat, even justifying the possibility of Israel and the US attacking Iran militarily.

Josh’s father, Manny Muravchik, headed the Jewish Labor Committee for about two decades in the 1960s and ’70s, and was an old Socialist Party stalwart.  So Josh was born into the Socialist politics that shaped his early years, but renounced socialism in one of his earlier books, Heaven on Earth.

In the same issue of The Jewish Week, Jonathan Mark writes an entertaining article (“Sharing The Wealth: Stickball, socialism and Bernie Sanders’ run for the White House”), more about socialism than Sanders.  Among the things that makes Sanders an unlikely winner in the contest for the Democratic nomination against Hillary Clinton are: his age (73), both components of his secular-Jewish background, and his professed advocacy of “socialism.”

Mark extensively quotes and paraphrases our own Arieh Lebowitz (whose day job is as associate director of the aforementioned Jewish Labor Committee), but Arieh and I have both noticed that the writer didn’t quite get it right.  Mark downplays the fact that capital S Socialists and capital C Communists became two very different parties and movements in the early 1920s. In general, support for Soviet misdeeds under Stalin came only from Communists, not from Socialists. (Hashomer Hatzair fell in between the two, attempting to ally with the Communist movement in the 1920s, but being rejected for its Zionism.)

For example, Mark errs grievously when he refers to the American Yiddish-language paper, the Morgen Freiheit, as “socialist” instead of Communist:

. . .  In 1929, Arab riots in the Yishuv (pre-state Israel) killed 130 Jews, a “pogrom” said the socialist Yiddish paper, the Morgen Freiheit. Then, to placate communists, the Freiheit turned and pinned the blame on “Zionist-fascist” provocations.  . . .

Actually, this sudden change reflected the dictates of Moscow in promulgating a new international Communist line.