Ron Skolnik served us as assistant director in November 2005 until succeeding Charney Bromberg as executive director from January 2008 until Jan. 2014. What follows is a bit over half of Ron’s latest article in Jewish Currents, “Is the Left Israel’s Most Endangered Species?“:

When Binyamin Netanyahu spoke to Likud party activists in December 2014 to energize them for the grueling current election campaign, he framed the contest as one that pitted his Likud not against any particular party but against “the Left” as a whole. Netanyahu repeated the battle cry in January, declaring ominously, “We have to win these elections because we know exactly what the Left would do” if it came to power after March 17th. Just in case the message failed to penetrate, in February Netanyahu took to Twitter to rule out forming a coalition with any “Leftist” elements.

His choice of the term “Left” — “smol” in Hebrew — as a constant refrain was anything but haphazard. A practiced politician and consummate rhetorician, the Likud party leader has a solid grasp of how various words and phrases resonate among the Israeli public, and he knew full well that depicting his chief political rivals as “smolanim” was red meat for large numbers of Israelis, not only among his far-­right base.

One need not be a public relations guru to know that “Left” and “Leftist” are more than just neat political categorizations in Israel. In popular parlance, they serve, as often as not, as derogatory terms, employed to stigmatize the person or group so described, and to attribute to them one or more fatal flaws in the spheres of policy, socio­cultural demeanor, and/or personal character.

There are parallels in American politics, of course. To discredit his critics in the 1980s, President Ronald Reagan would counterpose “liberals” to “real Americans,” and his successor George H.W. Bush would speak of the “L word” to suggest that liberalism was a worldview that Democrats were ashamed to admit to in anything louder than a whisper. Cross-­cultural comparisons can be prone to oversimplification, however, and the analogy here between Israel and the U.S. goes only so far. Whereas the ideological rift between American conservatives and liberals now runs primarily through questions of taxation and spending, cultural diversity, and the role of government in society, in Israel the almost­ exclusive basis on which “Left”and “Right” labels are applied in the media and the public mind has, for decades, been the position one takes in the debate over national security — that is, over war and peace with the country’s neighbors, especially the Palestinian Arab people.

Other topics, including questions of religion and state, economic inequality, or women’s rights, do arise and have significance in Israel’s national discourse, but no other single issue establishes the same dichotomous “Us versus Them” effect that the Likud has hammered away at in the recent campaign. While “leftism,” depending on the context and audience, can be derisive shorthand for any number of negatives — haughty “eggheadism,” godlessness, support for Soviet­ style centralized control, even patrician birth and economic privilege — the term’s two predominant associations are: 1) spinelessness on issues of national security; and 2) ethno­national disloyalty.

Seen in this light, “Leftist” in Israel can sometimes be closer in connotation to the long ­ago American political epithet, “Commie,” of the early 1950s. Both terms were used by a society anxious over a palpable external threat in order to discredit unpatriotic “enemy sympathizers.” Those who are left ­of­ center in Israel are thus described variously by senior rightwing officials as “collaborators” with the Palestinians, “Arab­lovers,” “germs,” “enemies of Israel,” and “traitors who must be persecuted.” Netanyahu categorizes them as “anti­Zionists.” In kinder moments, the Right describes the Left as “grovelers” before the international community, “weak and submissive” in the face of terrorism.

Leftists are also depicted as rather questionably legitimate “members of the tribe.” In October 1997, for example, a first-­term Prime Minister Netanyahu was caught on microphone disparagingly telling an influential ultra­Orthodox rabbi that “the members of the Left have forgotten what it means to be Jewish.”

This past February, a West Bank settlers’ organization amplified that message, producing an inflammatory video that presented Leftists as mercenary spies working at the behest of a Nazi-dominated present­-day Europe.

UNDER THIS CONSTANT BARRAGE of delegitimization by the Right, progressives have been in hasty retreat from the Leftist label over the past generation, according to public opinion expert Tamar Hermann. A poll conducted just days after Netanyahu’s 1997 affront, for example, found that 32 percent of respondents self­-identified as Leftist, compared to 37.5 percent Rightist and 20 percent Centrist. The Left’s size has dropped dramatically since, and according to a variety of recent polls, only 10 to 15 percent of Israelis now assign themselves this tag. Though the number of Israelis who say they “lean” left rises a tad when “Center­ Left’ and “Center ­Right” are added as categories, the overall trend is clear:

A great many Israelis have either abandoned their leftist orientation or now feel too uncomfortable to admit to such views.  . . .

Sadly and ironically, the rightwing assault on Leftism has received a boost from many of the same leaders whom the Right wishes to tar with this label. Shelly Yachimovich, for example, the Labor Party chair between September 2011 and November 2013, famously declared during an election campaign that Labor “is not a leftist party and never was. It was a centrist party.”

Understanding that the voting public’s trust in the Palestinians was nearly nonexistent and that it regarded support for peace as naïve at best, she explained apologetically that her party’s two­decade pursuit of an agreement with the Palestinians had been “out of pragmatism and not out of some romantic dream.”

Yachimovich’s successor, Yitzhak Herzog, has likewise distanced himself from any overt leftist markings, and Yair Lapid, head of the Yesh Atid party and another sharp critic of Netanyahu, also made sure to define his party as centrist. Fashionably dismissing the Left — a label he gladly cast upon the rival Zionist Union slate (the new amalgam of Herzog’s Labor and Tzipi Livni’s Ha’Tnua party) — Lapid insisted that Israeli voters’ only real choice in 2015 was “between Center and Right.” 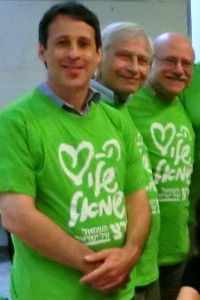 Ron Skonik (front) with Irwin Wall and Ralph Seliger, wearing the Meretz “My heart is on the Left” tee shirts in 2012.

Bucking the trend, Meretz has actively embraced the leftist moniker. After a failed 2009 election campaign in which it, too, fled to the center, downplayed its pro-­peace credentials, and was punished by its voters, Meretz, under [the] new leadership of Zehava Galon in the 2013 campaign, decided to change tack. Seeking to turn a rightwing slogan on its head and convert it into a rallying cry for its supporters, the party adopted the slogan, “Smolanim Habaytah!” Literally meaning “Leftists, Homeward!,” the phrase is chanted contemptuously by rightwing activists to demand that supporters of peace and equal rights “go home.” When deployed by Meretz, of course, the slogan became a call to the party’s base to “come home” to its natural political representative. Maintaining this brand, the party continues to refer to itself as Israel’s “True Left.”

Meretz’s goal to restore a leftist esprit de corps is commendable, but its use of a “circle the wagons” message suggests that its hardcore base is looking to find refuge from a hostile society more than to influence that society. The party’s grassroots efforts have similarly been directed more at shoring up the support of its traditional voters than breaking new ground. In playing upon the Left’s image as an embattled minority, Meretz has inadvertently reinforced that image.  . . .

This entire article can be read at the Jewish Currents website: http://jewishcurrents.org/is-the-left-israels-most-endangered-species-35838.