Riding the Rails to Jerusalem

Riding the Rails to Jerusalem

This is a very hard post to write because it’s a confession. But I think it’s important as it reveals precisely how toxic things are here right now and for a too long already.

I’ve been taking the train two days a week to teach at the Kibbutz Seminar College in Tel Aviv. The trains run well and I love public transportation. On my way back to Jerusalem the other night, two men got on the train. They are in their 20s, dressed in work clothes and speaking Arabic. One sits across from me and the other across the aisle. Just two regular people coming home at the end of the day. 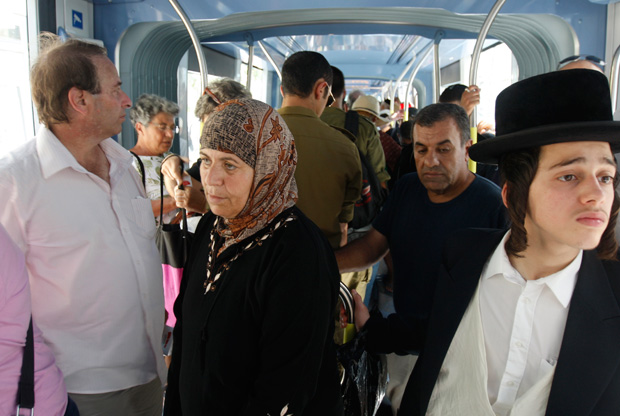 On the Jerusalem light rail

And here I am. My anti-racist principles and my empirically and informed understanding of the communities in my country, their members and cultures do not inoculate me from feeling afraid. I live in a city that is a third Palestinian. There would be mayhem in the streets if even one percent of that third tried to harm Jewish Israelis. It would look like Sarajevo in the 1990s. I regularly interact with Palestinians from all walks of life, all levels of education and economic status without any issue. And the only discomfort I’ve experienced is the consciousness of our different subject positions–of my irreducible privilege.

And yet here I am looking for the knife. I’m thinking about how I could maybe block it with my laptop if something happens. I’m monitoring them, discretely, I think, so much more than if they were hipsters or hasidim. Neither of them seems completely relaxed. Or am I projecting my own anxiety? The man across the aisle seems to be looking at me. Maybe he’s looking past me out the window? Maybe he saw me looking at him? Were I a young Palestinian man, I would be on constant alert among a Jewish majority. Statistically speaking, this young Palestinian man has much more to be anxious about than me. If I were him, I doubt I’d feel completely relaxed outside my own house, even my own neighborhood. It must be awful to be made to feel a foreigner in your own country, a stranger in your own home. My three Arab students this semester always sit on one end of the classroom together. I hope they are as comfortable as possible in my classroom. But I doubt they are as comfortable as my thirty Jewish students. 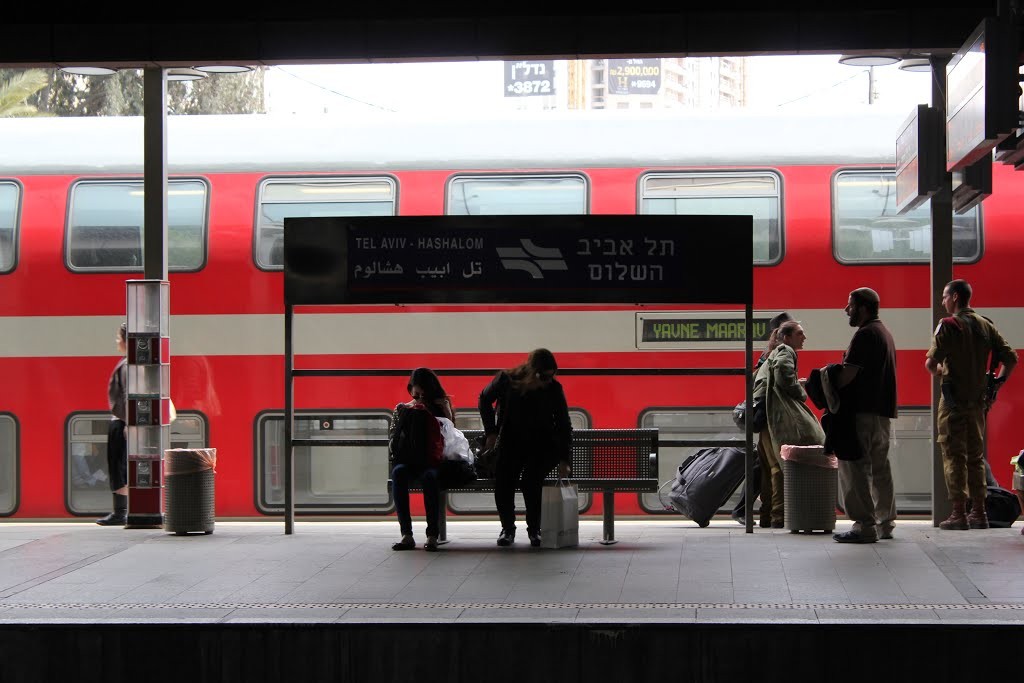 The train in Tel-Aviv

So here I am on the train, thinking about my three kids waiting for me at home. I’m thinking that I just texted my wife to let her know I made it on the train. I’m thinking of my eldest’s Bat Mitzvah next spring. And I really want to change seats. I can feel the impulse to do so tense up my muscles. But I don’t. I won’t. I won’t give into the toxic paranoia that divides us. I ask the man across from me when the train is due to arrive. I already know. But maybe talking to him will give me a sense of whether or not he means to do me harm. Of course I feel guilty doing so. Because I know the odds that he intends harm to anyone are so low, He’s just a guy like me on his way home from work. He looks at his phone to check the schedule and tells me. I thank him.

One stop before mine, the two men get off the train. I look to see if they have left anything behind. Yet it’s almost inconceivable that anyone who is young, male, and Arabic speaking could get a device through the metal detectors and security personnel we all pass through to get into the train station. They took their backpack. It probably contains the remnants of their lunches, maybe a water bottle, or a sweatshirt, or a wallet, or a book, or a bag of chips.

And I’m relieved. And I feel just awful.

So yeah. Me too. I’m afraid, suspicious, anxious and paranoid around members of another community who exhibit no signs that they wish anyone harm. The only trigger is their affiliation and identity. I may not be racist. But I am not so sure that I am not not racist. And I know how hard it is for anyone to resist racist sentiments in a racialized society. We constantly imbibe the fear and the joy, the benevolence and the violence. the generosity and the impatience, and everything else that radiates off the people around us. And I did resist. And it was hard. And it wasn’t heroic because it’s so awful that I had to resist. It’s awful that I am not above it.

And I wonder who the hell I am.

This article was contributed by guest writer Ori Weisberg. Ori is a teacher, writer, translator, editor, and musician. He holds a Ph.D. in English Renaissance Literature from the University of Michigan and lectures in a variety of Israeli academic institutions, including Hebrew University, The Kibbutzim College, and Shalem College. He lives in Jerusalem with his wife and three children.