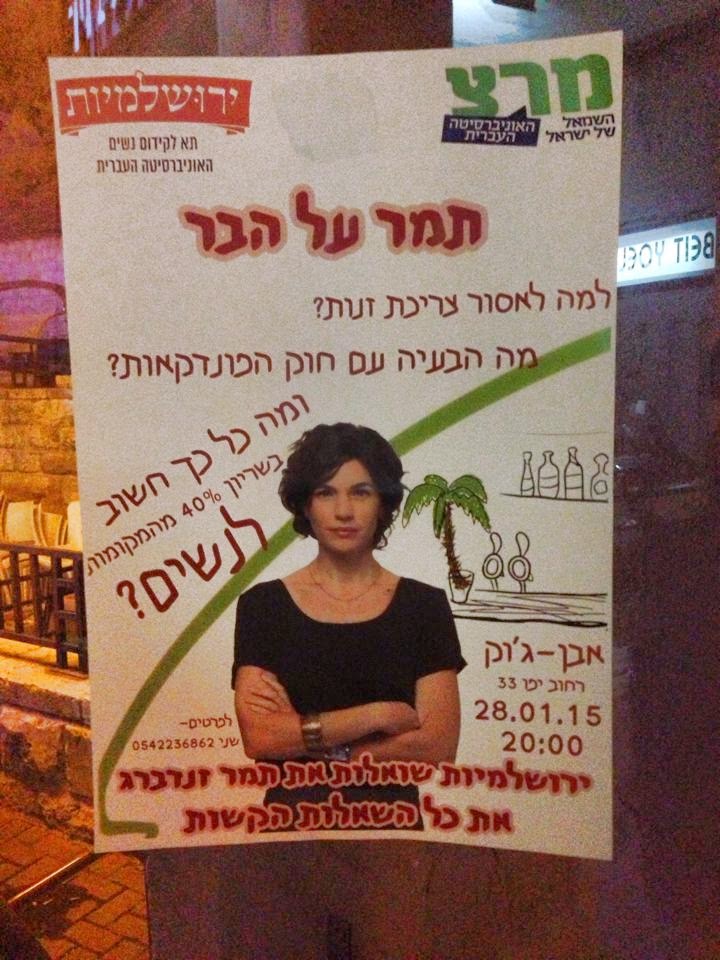 Continuing on my “pub-crawl” kick, I traveled to Jerusalem last nigh to attend a question-and-answer session with Meretz MK Tamar Zandberg– a rising star of Meretz and the left and a self-described feminist who has made gender, environmental, and housing issues a central part of her platform. She has also taken pains to make clear that her support for Israel ends at the Green Line, and has drawn up in the past a list of settlement-made products, encouraging her constituents to join her in boycotting them.

The first half of the meeting was focused mostly on questions and discussion regarding Zandberg’s embrace and promotion of feminism, comparing it to a “swamp, but in a good way”, describing its all-encompassing nature. She pointed to Meretz’s high concentration of women in the party, and their arrival in the Knesset because, and not in spite of their feminism. She refused, as a leftist, to isolate feminism as a mutually exclusive cause, linking it to the broader struggle in Israel against all forms of inequality, including protest against unnecessary military action.

While not against working with politicians on the right interested in promoting feminist initiatives, she was nonetheless critical of attempts to “pick-and-choose” some progressive causes while ignoring others, as well as the tendency to cynically exploit feminism to further their own agenda. When asked about the future, she was optimistic; the attaining of equal rights was a long process full of victories that might not end in our lifetimes. Defining feminism, she stated simply and succinctly that it was the idea that “women are human beings”.
Perhaps most interesting was Zandberg’s response to questions from the audience, a number of which were unrelated to her discussion on feminism. When grilled by an audience member (who, I might add, went on a bit of a rant) regarding Meretz’s lack of success in attracting more mandates, Zandberg held firm to the belief that Meretz could not compromise its ideological integrity. It was the center-left in 2013, she pointed out, that compromised on settlements and the peace process, hoping to win over more right-wing voters. This strategy, if one recalls, was not successful, leading to the Labor party attaining only 15 seats in the Knesset. Meretz, on the contrary, doubled its number of mandates. It was imperative to vote for and strengthen Meretz for this very reason: to prevent the center left and center from looking to placate the right and be held responsible for, once again, bolstering a Bibi-led government.
On the subject of war and peace, and the events in the north, a question that often plagues the left, Zandberg kept her cool. She said that she found it odd that, despite endorsing the most sensible solution to the conflict, Meretz and the left in general were condemned as being naive. That solution, of course, remains the recognition of both Jews and Palestinians to enjoy the right to national self-determination in their respective nation-states. The latter, like former have no less attachment to the land, and such a fact could not continue to be ignored.
Dealing with the very real threats of Hamas, Hizbullah, ISIS, Iran and the myriad other groups couched on Israel’s borders would not be made easier by the continued occupation and expansion of settlements in the West Bank. On the contrary, the status quo was actually preventing Israel from being part of the international effort dealing with these threats, of which it should be a natural member. Any attempts to argue otherwise amounted to the right wing’s age-old method of scaring the public into complacency and vilifying the left.

Zandberg showed herself to be a highly articulate, sophisticated politician with grace under fire-as a friend of mine at the event bemoaned, it’s a real shame that she doesn’t talk to the foreign media more often to present a side of Israel that many are not familiar with. And lest anyone interpret that as hasbara, I can assure you that if such were the case, Zandberg would likely be the first to offer, as an Israeli patriot, her most frank criticism of many of her country’s misguided policies.
By gfrenkel| 2015-01-30T09:16:00-05:00 January 30th, 2015|Blog|0 Comments