Politics of gayness in Israel (‘Pinkwashing’)

Politics of gayness in Israel (‘Pinkwashing’) 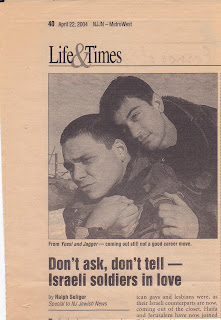 My review of “Yossi and Jagger” was published in the New Jersey Jewish News issue dated April 24, 2004 (see copy of entire article beneath this post). My piece on its sequel, “Yossi,” has been published in the current issue of this same newspaper.  The main character in both, Yossi, played by the same actor (Ohad Knoller), has changed his status in life from being a junior infantry officer who loses his lover, Lior Jagger, in combat in Lebanon, to a career as a cardiologist in a Tel Aviv hospital.  But he has not yet moved beyond his grief.  He remains deeply depressed.

And while Israeli society has changed to the point that being gay is no longer as stigmatized as it was ten years before, Yossi Gutman, M. D., has still not emerged from the proverbial closet.  The NY Times reviewer, Stephen Holden, expressed incredulity that Yossi’s young new love would be so open about his sexuality and so accepted by his boisterously straight army buddies.  But since the filmmaker is Eytan Fox, a gay Israeli who generally explores this reality in his films, who are we to doubt it?

Unfortunately, the relative advance for gays and lesbians in Israel is a source of contention that bleeds into the Arab-Israeli conflict and the overwrought polemics of pro-Israel defenders and anti-Zionist detractors. Pro-Israel elements will focus upon advances for gays
as evidence of Israel’s progressive nature; anti-Israel activists will condemn this as “pinkwashing,” an attempt to divert attention from Israel’s poor human rights record regarding the Palestinians.

As I put it in my new review: “advances are parallel to and slightly in advance of gains made for same-sex equality in this country. For example, openly gay members of the military were officially accepted years earlier in Israel than in the United States.”

Although I’m sure that Israel is far from nirvana for gays (what country is?), it is genuinely better there than in other countries in the Middle East.  This alone is worth noting.  But I’m sure it’s also true that when this fact is rolled out for purposes of hasbara (public relations or propaganda), pinkwashing is going on.  Still, can’t Israel simply be celebrated for a genuine achievement in this area?