The JTA press service is featuring a news story today on the election of Amna Farooqi (shown above with megaphone), a Pakistani-American Muslim and self-declared Zionist, as the new president of J Street U, J Street’s university student wing.  Our own Paul Scham’s role was mentioned as prominent in Ms. Farooqi’s evolution into a progressive Zionist:

Farooqi traced her full Zionist conversion to spring of her freshman year [at the University of Maryland], when she was picked to take on the role of Israel’s first prime minister, David Ben-Gurion, in a seminar.

. . .  In researching her role, she said she stumbled on “David Ben-Gurion: In His Own Words” in the stacks of the university library. She recalled poring over the short book, a compilation of Ben-Gurion’s thoughts on Zionism, Judaism and philosophy, late into the night. Ben-Gurion’s message of communal responsibility resonated with her, she said.

. . .  The professor of that seminar was Israel studies scholar Paul Scham. Having taught Farooqi in two classes her freshman year, he’s not surprised by where she ended up.

“Amna is surprising in the abstract,” he said. There are “a lot of students who aren’t Jewish who sympathize with Israel but feel that the Palestinians need a fair shake as well. Certainly it’s unusual, but, knowing her, it isn’t.”

He added, “I think it shows a mature choice for J Street that puts non-Jews who strive for peace into leadership roles, even if they’re not Jewish.”

This is from Ralph Seliger’s post on the J Street conference this past March, in which he reflected on Farooqi’s speech: 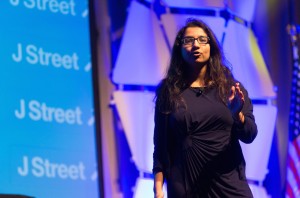 Farooqi’s poise and good humor were in wondrous evidence as she related having fallen “in love with Zionism,” because it’s a movement historically defined by a downtrodden people “taking ownership of its future.”  As she spoke of her positive experience studying in Israel, she also mentioned how disheartened she was by Israelis she met who were ignorant of, or indifferent to, the suffering of Palestinians a few miles away under occupation.  So even when delivering the most passionate Zionist speech of the conference, she was very much in sync with J Street’s concern that reasonable Palestinian aspirations for their freedom be met.

Some of us may recall that J Street U was originally founded as the Union of Progressive Zionists by a consortium of PPI (then known as Meretz USA), Ameinu, Hashomer Hatzair and Habonim-Dror.