Young Jews and Arabs Working Together

Noon on October 31st saw two members of Hashomer Hatzair World Movement and two members of its sister Palestinian youth movement, Ajyal, assemble in a conference room adjoining Partners’ office to speak about their joint work for a just, peaceful, and shared society within Israel. All four educator/activists opened the forum with brief accounts of the goals of their respective movements, noting both some successes of a variety of their initiatives and their attempts to meet the challenges confronting joint Jewish-Arab collaboration. May Qadah, head of Ayal’s education division, and Ayman Kabha, Secretary-General of the movement, addressed the special challenges facing young Palestinians with Israeli citizenship as they attempt to reach out to their Israeli-Jewish counterparts. Oren Zukierkorn, Secretary General of Hashomer’s World Movement, and Daniel Roth, Coordinator of the Movement’s English=Speaking Countries, told of the array of grassroots activities sponsored by the two youth organizations. Of special note was their joint initiative helping victims of the conflict in Syria who had fled the war to land as refugees on the Greek island of Lesbos. In the spirit of active engagement integral to their collaboration, the four speakers opened the lion’s share of the session to spirited dialogue with an audience eager to hear news of successful cooperation between young Arabs and Jews in Israel. Partners for Progressive Israel is proud to have sponsored an event that leaves its listeners with renewed hope for cooperative grassroots endeavors within Israeli society. 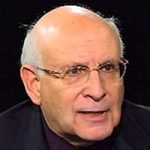 Lenny Grob is vice president of Partners for Progressive Israel