A small piece, delicate, hopeful, from a woman’s point of view, written by Haviva Ner-David, living in the Galilee in Israel, weaving peace baskets with her Arab neighbors the day of the Flotilla attack. This was turned down at the Jerusalem Post weekend magazine and prompted the cancellation of her monthly feature there, “Green Acres.” Instead, it was published at “Zeek: A Jewish Journal of Thought and Culture“: 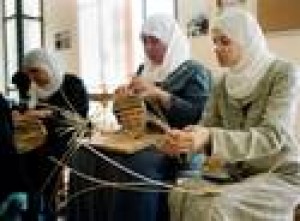 Last week, I headed out on Monday morning to my basket weaving class in Kufr Manda, Hannaton’s neighboring Arab village. Kufr Manda is the closest town to Hannaton, and it is there that I go for medical care, gasoline, pharmaceuticals, house and gardening supplies, and more. Before the convenience store opened in Hannaton, I went there as well to buy milk or bread. Kufr Manda is still where I go on a Friday afternoon–when Hannaton’s convenience store is closed–to buy anything last-minute before Shabbat.

The basket-weaving began a few months ago. I had heard about the opening of a center in Kufr Manda to teach women from the village how to weave baskets; it is run by by an organization called Sindyanna of Galilee, which empowers women to learn a fair trade skill and make some money without having to leave their village.