During the summer 2014 Gaza war, Noam Shuster-Ellaisi went to a peace rally in Tel Aviv. “Maybe I looked too Mizrahi, maybe I looked like an outsider. I don’t know. But I was forbidden from joining the demonstration.” Across the street, Noam’s family member, the fascist rapper known as the Shadow, held a counter rally for his supporters. They held “disgusting signs,” she said, and sought to beat up leftists and Arabs. Noam, who was raised in Neve Shalom/Wahat al-Salam (Oasis of Peace), the only community in Israel where Jews and Palestinians choose to live together, wanted to be with people who shared her desire “to end the madness of that summer.” But the self-appointed guardians of the antiwar rally did not recognize her as one of them. This story in a nutshell, she says, demonstrates the problem of the Israeli peace camp. “Who is allowed in this camp that talks about peace? Who is allowed to hold the word “peace” and say what it means? We have to do serious soul searching and ask how exclusive our camp has been.”

Speaking with Partners for Progressive Israel, Noam argued that pro-peace activists in Israel and the US have been so focused on solutions that they’ve left the Israeli public behind. They’ve been blind to the fact they were mostly engaging Ashkenazi-secular-liberals living in the privileged center. They haven’t reached beyond those lines. As a result, the peace camp became an cliquish club of the educated Ashkenazi middle class. So exclusionary that its self-appointed guardians instinctively identify a young brown woman as the “other” and assume she came to cause trouble.

The failure to engage diverse communities has undermined the peace process and brought its demise. For example, Noam says, the peace camp failed to engage religious leaders even though, “a political process in Israel cannot be successful without serious spiritual backing. Rabbi Ovadia Yosef, in 1979, when he was Israel’s chief Rabbi, gave a religious ruling saying that the value of life is higher than the value of land. This gave a spiritual backing to the peace agreement with Egypt. It allowed settlers to evacuate the Sinai.” “Who are the spiritual leaders who could potentially support a future peaceful solution?”

Noam is the program coordinator of Interpeace Israel. It’s her job to work with strategic populations in the Israeli society who were previously excluded from the peace process. She engages former soviet Jews, Palestinians, ultra-orthodox women and Likud center officials among others. “It’s very difficult. It takes time and a lot of compromise,” she said. But “how do we know that there aren’t people out there who are our partners? Have we tried? Did anyone ensure that the resources given to the peace camp would be allocated to target diverse populations?”

Noam argues that in our obsession with the solution, we’ve failed to see that the battle lines have shifted dramatically since the 1990s. Israel is experiencing a collapse of the Left/Right paradigm. “Ironically,” she told us, “a funny thing happens” when Israelis watch a debate on television about a resolution to the conflict. On the one hand, there would be “a very traditional centrist-left, maybe a Labor [Party member], Tel Aviv, secular politician, who talks about the importance of separating from the Palestinians to maintain the Jewish and democratic character of Israel. And next to him, there is a member of the current coalition, a rightwing religious Zionist MK, Yehuda Glick, saying, ‘but we want equality. We can continue having a Jewish-democratic and give the Palestinian equality.” Noam says that the camp that perceives itself as the left-center secular Zionist is proposing a resolution that “might be more militaristic, more militant, or at least look like a more rightwing agenda than what the right wing is proposing.”

“Who are we kidding?” she asked. “How can we make twenty-two percent of Israeli citizens divorce their cousins behind the wall?” On the other hand, she says, she cannot empower “an ultra-national-religious activist who aspires to a state of Jewish superiority.” “Where am I between these two failing agendas? There is a dangerous vacuum in the middle.”

Noam is not arguing that the two-state solution is dead. Rather, she challenges traditional peace camp preconceived assumptions of who are “the good guys” and who are “the bad guys.” She demands that they stop seeing every settler, every religious person, and every Russian immigrant as the enemy. She asks that peace activists engage others in their community, judge less, and ask more questions. And she asks that we do the same in our Jewish communities.

This is a fascinating conversation and one you will not regret listening to. If you find it interesting, consider joining our Israel-Study tour in January which will focus on the cultural, economic and social forces promoting and hindering a peaceful resolution to the conflict. You’ll have a chance to meet Noam and others who fight for peace often against conventional wisdon The trip’s goal is to enhance participants’ advocacy tools and discuss how we, Americans, can help steer Israelis and Palestinians toward peace. Underlying the tour is the question why Israelis and Palestinians don’t choose peace and what forces on the ground that can help change this. 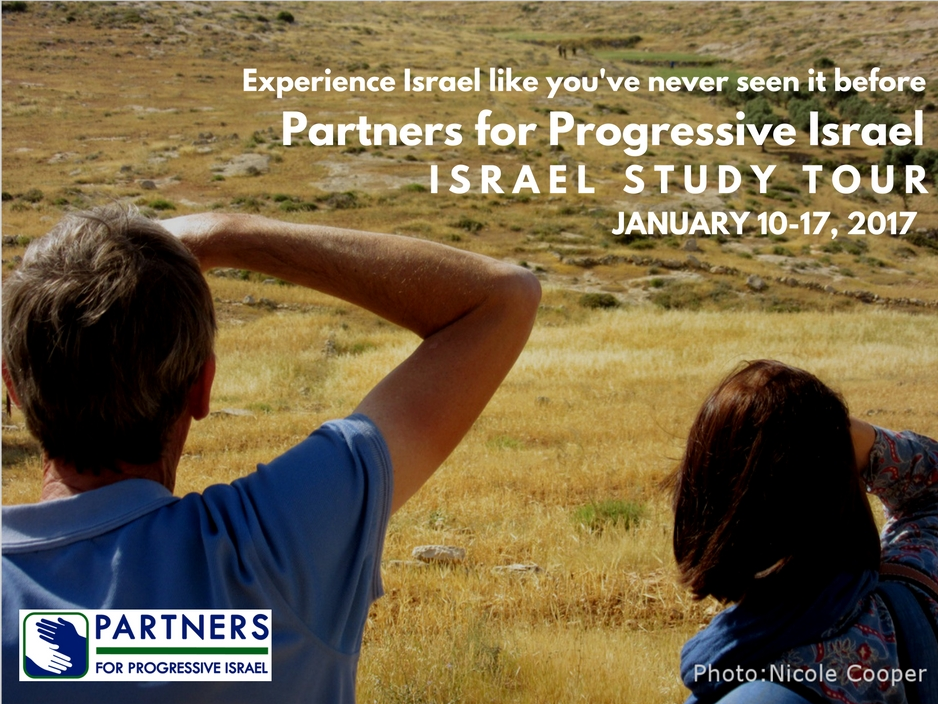