We just received the following email from Dror Morag, Senior Representative of the World Union of Meretz at the Zionist Institutions regarding the plans of Keren Kayemet L’Yisrael/Jewish National Fund (KKL/JNF) to purchase land in the West Bank for settlements. The final vote will be on April 22nd. He is appealing to us to do everything we can to stop this dangerous change in policy that could prevent any future Israel-Palestine peace.

“These discussions [on the policy change] are the culmination of a process that began several months ago and that so far has been blocked by the 37 members of the Progressive Bloc in the JNF board of directors. In previous votes on the matter, we have lost by only one or two votes, showing that JNF does not have a consensus on the issue, but only a narrow majority. Thus, unlike in the Knesset, here in the JNF we have an actual ability to win this vote.

In preparation for the final vote on the board, we are making efforts to persuade some board members who chose to abstain and/or voted with the right [on preliminary votes], who we think might be persuaded to vote with us or at least abstain. Those organizations are Na’amat International, Na’amat USA, Women@Work, World WIZO, WIZO USA, B’nai B’rith, Maccabi World Union, and Hadassah. Public pressure can work!

If you or your friends or family are members of any of these organizations, please contact them and urge them strongly to vote against land purchases in the West Bank. I especially call on supporters of the Labor Party and its leader, Meirav Michaeli, to take a stand on this matter and persuade Na’amat to vote with the progressive bloc. Every vote counts!

Please help us to get Na’amat and the leaders of the groups mentioned above to change their votes! No land purchases by JNF in the West Bank!” 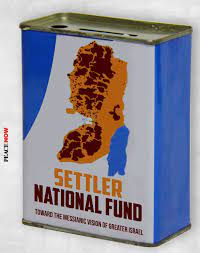