The following is from Ethan Bronner’s April 7 NY Times profile of the newly elected head of Kadima, still the largest party in the Knesset: 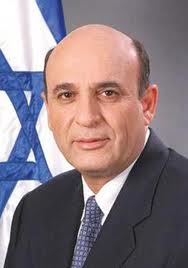 WHEN Shaul Mofaz took over as head of the opposition in Israel this week — having defeated Tzipi Livni to lead the Kadima Party — it was seen as further evidence of the country’s rightward shift. … Mr. Mofaz was dismissed by many as … a hawk who would try to join the governing Likud coalition.  So it was surprising to … hear him detail an agenda more typically associated with the left.
He said Mr. Netanyahu’s focus on Iran’s nuclear program had distracted attention from … making peace with the Palestinians, ending settlement building in much of the West Bank and reducing the country’s socioeconomic inequality. Let President Obama handle Iran, he said. We can trust him.
“I intend to replace Netanyahu,” Mr. Mofaz, 63, said …. “I will not join his government.”
Then: “The greatest threat to the state of Israel is not nuclear Iran,” but that Israel might one day cease to be a Jewish state, because it would have as many Palestinians as Jews. “So it is in Israel’s interest that a Palestinian state be created.”

Mr. Mofaz said that Israel’s alliance with Washington was its greatest strategic asset, and that aligning Israeli policy more with Washington was necessary. …
…. Mr. Mofaz plans to turn his modest background and unassuming assiduousness into assets at a time when many feel alienated from leaders like Defense Minister Ehud Barak, who recently sold an apartment for millions of dollars. Mr. Mofaz said that when social protests over high prices and indifferent government resume, as expected, this summer, he will be part of them because he understands the protesters.
“I have four children, two of them married, and three grandchildren,” he said. “My kids are among the young couples that can’t make ends meet. … In Israel of 2012, only part of the population enjoys the fruit of the country’s economic growth. The rich get richer and the poor poorer.”
Mr. Mofaz was born in Tehran and moved with his family to Israel at the age of 9…. His father had been a school principal in Iran, but his attempt to open a small factory in Eilat in the 1950s failed, and he was forced to seek work as a menial laborer. The family lived in one and a half rooms, two children to a bed, and there were days when the refrigerator was empty. At age 10, Mr. Mofaz worked in construction.
…. MR. MOFAZ’S security credentials [as a former IDF chief of staff and defense minister], along with his tale of overcoming adversity as an Israeli of Middle Eastern origin, could offer powerful political advantages….
…. His belief that Israelis want to talk about peace with the Palestinians seems counterintuitive. The issue has been fading from the public agenda, with most expressing the belief that Israel has no partner. But Mr. Mofaz says he would start with an interim Palestinian state on 60 percent of the West Bank and negotiate the rest.
Mr. Mofaz says Israel should keep the West Bank settlement blocs but give the Palestinians 100 percent of their territorial demands by swapping land. He believes that borders and security can be negotiated in a year, and that tens of thousands of settlers would leave their homes with the proper incentives. …
Then, he said, Israel could devote the resources used in settlements to its socioeconomic needs. …

This article paints Mr. Mofaz as other than the hardliner he has usually appeared to be.  Yet his moderate stance quoted above regarding Iran is somewhat contradicted by this more recent pronouncement, cited the other day in the Jerusalem Post: “The only way to monitor the Iranian nuclear program is to bring it to an end. This is the Obama administration’s task and its test.”

He went on to assert that anyone who believes that Iran would maintain a nuclear program only for peaceful purposes is “deluding himself.”  So the question persists: is he moderate and progressive or something else?