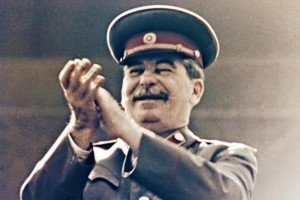 Philosopher Slavoj Žižek notes that after delivering a speech, Stalin would stand up and applaud himself. He argues that Stalin believed he was the manifestation of historical reason, and therefore that he was in fact applauding history.

Recently Binyamin Netanyahu has been showing a similar sentiment. In a series of campaign clips, Netanyahu has taken to comparing himself to three Israeli prime ministers who stood up to the US administrations and made necessary historical choices for the future of Israel: David Ben-Gurion announced the establishment of the State of Israel despite Truman’s objections. Levi Eshkol chose a preemptive attack on the Egyptian and Syrian armies in 1967, even though Lyndon Johnson’s Administration had asked him to wait for a possible diplomatic resolution. And Menachem Begin in 1981 attacked Iraq’s nuclear reactors against Regan’s instruction and despite the UN Security Council unanimous condemnations. Netanyahu believes that his speech in the US Congress is equivalent. When the Republicans in the House will stand for an ovation, Netanyahu, like Stalin, will probably stand too. He feels history speaking through him.

In recent weeks commentators have been attempting to explain Netanyahu’s decision to speak to Congress in spite of the inevitable results. Paul Scham has written here that this is neither a miscalculation nor a mistake: “Bibi and Dermer […] knew exactly what they were doing.  There is every reason to believe they welcome the controversy.”

I agree, but why? My only explanation is that Bibi bought into his own cult of personality. He believes he has prophetic power.

There is other evidence that Netanyahu has bought into his own cult of personality. In the last few days, Monique Ben Melech, former Sderot mayor Eli Moyal’s domestc partner, finally agreed to disclose a recording of a phone conversation she had with Sara Netanyahu last August during Operation Protective Edge. Sara Netanyahu called Ben Melech late at night after her partner Eli Moyal criticized Netanyahu on television. The conversation is illuminating because it strongly suggests that Netanyahu is living with a woman who thinks he is history too.

“Who is this Eli Moyal of yours, did he ever do anything? He will never be Bibi,” she continued, using her husband’s nickname.

“Your man doesn’t reach my man’s ankles. What made him say those things? Pure jealousy,” Sara Netanyahu said.

She suggested that “if Bibi was born in the United States, he could have easily become the president. The whole world admires him.”

So when members of the US Congress stand and applaud Netanyahu, will he clap too?

Ben Gurion  “In 1948, Ben-Gurion stood before a fateful decision: The creation of the State of Israel. The U.S. secretary of state firmly objected. Ben-Gurion — contrary to the State Department’s position — announced the establishment of the state. Would we be here today had Ben-Gurion not done the right thing?”