Yesterday, November 29, the world marked two events: the 68th anniversary of the UN Partition of Palestine decision and the International day of Solidarity with the people of Palestine. At a moment suspended between symbolism and irony, PM Netanyahu retaliated yesterday for the EU decision to mark products made in the Occupied Territories by announcing the suspension of EU role in peace process with Palestinians.

A senior official at the Foreign Ministry argued that the EU decision is “a discriminatory step that smells of a boycott” and added that “it is inconceivable that Israel will hold dialogue with EU institutions on how to advance a peace process while the EU simultaneously initiates measures against Israel.” Israel, the official said, “will examine each case individually with the guiding principle of making sure Israel’s interest vis-à-vis Europe and EU nations are not harmed.”

In wake of the Paris attacks, while the world raises its eyes to the Paris Climate talks, acknowledging that discussion and collaboration are the only ways forward, Israel does not. Instead, PM Netanyahu throws his toys at the EU and refuses to play.

PM Netanyahu’s decision is infuriating, though not surprising. Over the course of his time in office, Netanyahu has pushed Israel into diplomatic seclusion. He termed every critique of violation of international law anti-Semitism; every affirmation of the UN decision 68 years ago to establish two states was coined “anti-Israeli” sentiment and discarded without thought. Netanyahu’s volatile behaviour on the international stage wears out even the most loyal European supporters of Israel. 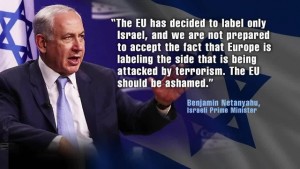 As I have argued here before, by establishing a distinction between the legitimacy of the sovereign state of Israel and the illegitimacy of the project of the settlements the decision to mark products enables Israel to move towards peace.  Netanyahu’s onslaught on the EU’s decision and his behaviour on the diplomatic stage push people into the BDS camp. For if distinguishing between the Occupied Territories and Israel is unacceptable, the only alternative is to boycott Israel as a whole. Only last week the American Anthropological Association decided with a whopping majority of 88% to support BDS and the American Historical Association will vote on a similar proposition on January 9.

Netanyahu shows not only disinterest but ignorance for international relations. The EU is now at one of the most significant tipping points it had experienced since its inception.  In a time when Britain is caught up in a debate around Brexit: the exit of the UK from Europe, an issue upon which the last election hinged quite strongly, and following a summer in which the world watched with anticipation the monetary resolution of Greek-German relations within the EU, the move to disengage the EU is more than alarming; it is dangerous. It is pushing Israel towards further economic, military and political seclusion in an increasingly insecure world.

“Maybe instead of playing an infantile ‘blame game’ with the EU, the Prime Minister will use this opportunity – not only to shake hands, but to warm the political climate, under the auspices of European countries.”

A week ago, Galon explained that:” this is what conflict management looks like in Israel; the reality of living on one’s sword that Netanyahu asks for us to accept. The dead, the wounded, Israeli citizens living with constant anxiety, we all are paying the price for the settlement and occupation policy. Instead of the violent and forceful solutions that have never helped before, and nor will they help now, PM Netanyahu must understand that the only protective shield from terror is offering a real diplomatic policy that will offer Israelis and Palestinians hope. A policy that will bring us out of the despair this right wing government tries to bring us towards”.

Let us hope that Netanyahu stops partitioning Israel from the rest of the world and endorses a braver policy, returning to the diplomatic course and allowing Israelis and Palestinians to have a peaceful life, a solution long overdue.