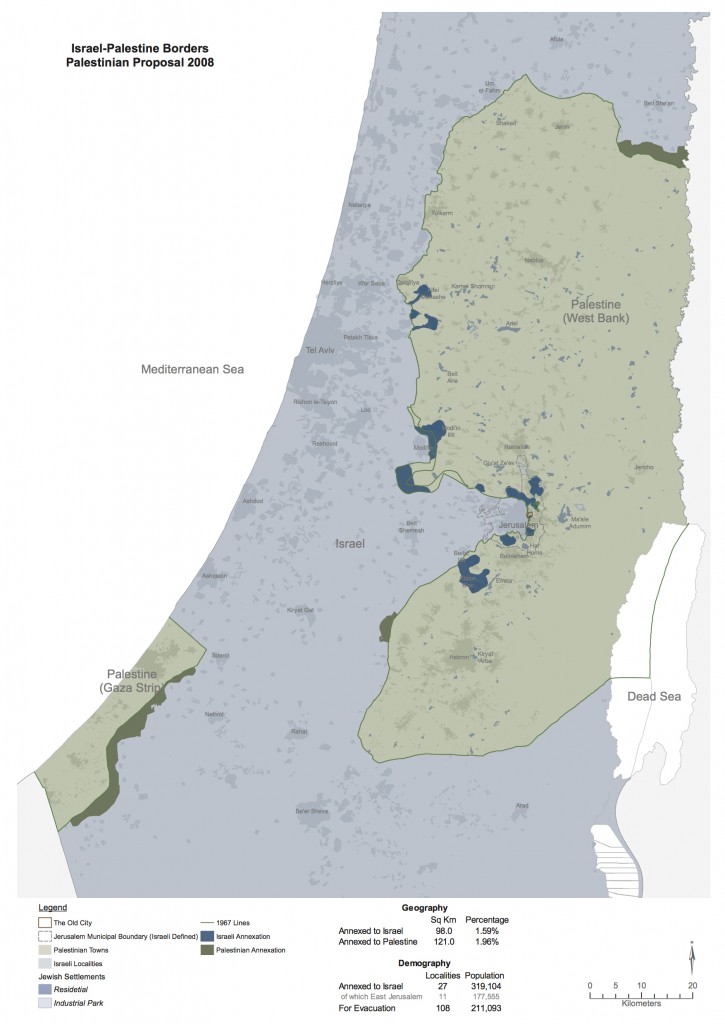 Palestinian proposal on borders (versus Israeli proposal above) in 2008 Olmert-Abbas negotiations; a 2% land swap versus 6 to 7%.

This statement by Americans for Peace Now (reacting to Netanyahu’s settlement bloc negotiations gambit) is consistent with my post last week on negotiating mutually-agreed boundaries to the settlement blocs as integral to establishing a two-state solution. APN endorses the Clinton Parameters and the Geneva Initiative in its penultimate paragraph — both of which favor this approach:

We believe that an Israel-Palestine two-state initiative in the United Nations Security Council, led by the Obama Administration, or formulated in cooperation with key international partners, would be a powerful vehicle for such an articulation. Such an initiative should be undertaken as soon as possible, as developments on the ground every day render the prospects for a two-state solution more remote. Such a resolution should lay out clear parameters for a future Israeli-Palestinian two-state agreement, grounded in the Clinton Parameters, consistent with an outcome along the lines of the Geneva Initiative, and supportive of broader Israeli-Arab peace based on the Arab Peace Initiative.  . . .

Also last week, the Israel Policy Forum hosted an “on-the-record” teleconference with Dan Rothem, a “Senior Policy Consultant” for the S. Daniel Abraham Center for Middle East Peace. Rothem is an authority on maps and demographics related to the various proposals advanced by Israel and the PLO in previous rounds of negotiations — especially the Olmert-Abbas round that culminated in 2008.

He was most illuminating on the different Israeli and Palestinian conceptions of acceptable boundaries to the settlement blocs. (See maps displayed at the Abraham Center website.)

Olmert’s proposal was for Israel to annex 6-7% of Palestinian territory with 70,000 Israelis to be evacuated; the Abbas proposal was for 2%, with 210,000 to be evacuated. The difference, says Rothem, is what needs to be negotiated over.  Rothem refers to the Geneva Initiative of 2003 and David Makovsky’s study of 2011, for the Washington Institute for Near East Policy, as meaningful quests for compromise.