Looking the Occupation in the Eye:
Bringing the Harsh Truth to the Israeli Public
By Guy Hirschfeld and Doron Meinrath

Atrocities and crimes are being committed in the West Bank, both in our name and yours. Unfortunately, there’s no nicer way to say it. Our organization, “Looking the Occupation in the Eye” (Mistaclim LaKibush Ba’Aynayim), founded in 2021, has emerged from the understanding that it is time to be more frank about what’s going on and less “politically correct”, even if this sometimes might provoke resentment. Reading this article won’t be easy for some, but here’s our unvarnished take.

The nightmare of occupation has been going on for 55 years, and in recent years has grown even worse. The injustices are largely committed by the Israel Defense Forces (IDF) and Border Police, which function beyond the Green Line as the country’s official occupation forces, and involve an ever-increasing amount of land theft, confiscations, home demolitions, arrests and violence. They seem to be doing everything in their power to make life miserable for the Palestinians.

Of course, the settler gangs are contributing their share to the ongoing injustice; these “Lords of the Land” take over more and more lands and abuse Palestinians – shepherds, olive growers, landowners, and many others – all over the Palestinian territory. This small but hellbent group is motivated by a Messianic ideology that sees Jews as a chosen and supreme people, with exclusive rights over the entire land between the Mediterranean Sea and Jordan River. For them, the existence of a ruling people, the Jews, and a people ruled by them, the Palestinians, is not some temporary situation, but the desired reality. As far as they’re concerned, the Palestinians are not entitled to any national rights whatsoever, and whatever individual rights they are given should be kept to a bare minimum.

The settler movement is taking advantage of the festering situation and working to create de facto an irreversible reality. The State of Israel is allowing them to lead the way and is advancing with giant strides toward a state of affairs in which it rules eternally over another people, while applying two separate systems of law for the two national groups living in the same West Bank territory. The settlers have largely succeeded in manipulating the military forces operating in the West Bank to do their bidding and they give assistance to the settlers’ activities – often at odds with the government’s position. 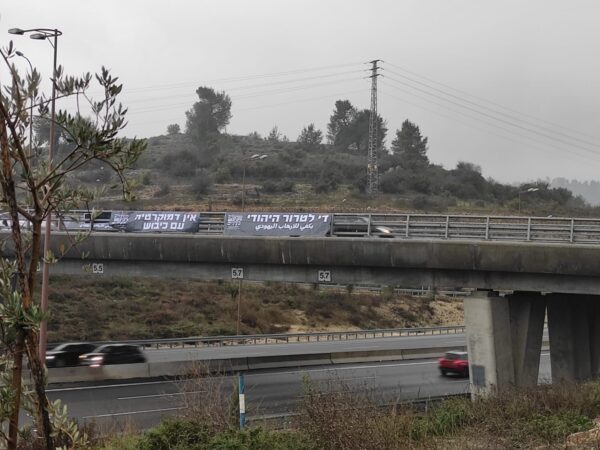 “There is No Democracy with Occupation”, “No More Jewish Terror” – Looking the Occupation in the Eye signs on one of many overpass bridges, every Saturday night.

“Looking the Occupation” was established based on the understanding that even those Israelis who define themselves as leftist or liberal often do not have the slightest idea about what is going on daily beyond the separation barrier. That is why we decided, as a group of activists coming from different social and human rights protest milieus, to bring the occupation back into Israeli public discourse.

Our group is willing and prepared to act anywhere – both inside the Green Line and beyond it, in Palestine. We do this voluntarily alongside our regular life and jobs, working intensively both in recurring weekly activities and in campaigns towards a specific goal. We started small but are growing constantly and, to date, nearly 200 people have expressed their willingness to engage in on-the-ground action. We’re just getting started. 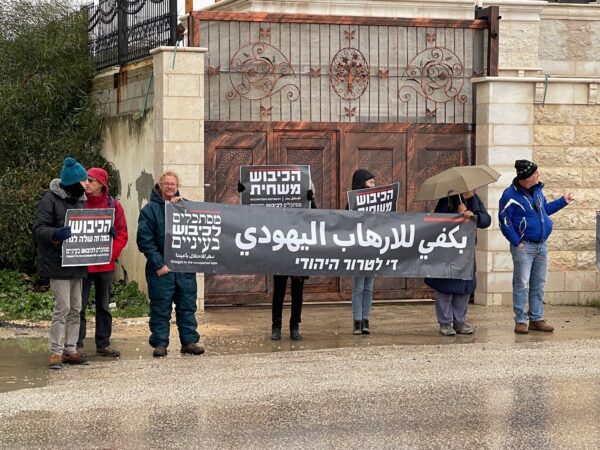 Rally in the Palestinian town of Hawara (West Bank), north of Nablus, whose residents are frequently assaulted by settlers.

We’ve all been at this for a long time; we’ve been witness to the horrors and crimes on a daily basis, and exposed to the brutal reality of the occupation. This is why we are blunt and “impolite” – it’s a transformation common among activists who’ve “been there” and have experienced such events firsthand alongside the Palestinians.

Our operating strategy is strictly one of nonviolent resistance – but we don’t settle for just quiet protesting: We initiate direct actions that get in the face of the settlers and challenge the security forces. We work in cooperation with Palestinian colleagues who often stand together with us in the West Bank, and also cooperate with other Israeli leftwing organizations.

“Looking the Occupation” operates regularly during the weekends: Every Thursday, we stand with signs at a central location in Tel Aviv and try to talk to the passersby about the reality of the occupation. Some people curse us, others agree with us, and we also manage to hold in-depth conversations. Every Friday, we go to demonstrate at the Za’atra junction (which most Jewish Israelis refer to in Hebrew as “Tapuah [Apple] Junction”), a central interchange in Palestine, where we verbally confront the settlers who are angry at our entry into what they see as their territory, and where we are also cheered and applauded by the Palestinians who pass by. Every Saturday evening, we stand on dozens of bridges over major roads throughout the country and wave placards against the occupation, such as “There is No Democracy with Occupation” and “Palestinian Lives Matter”. We face a wide range of reactions – from verbal, and even physical, violence, through a desire to talk and examine our claims, to cheers, with some even spontaneously joining the event. 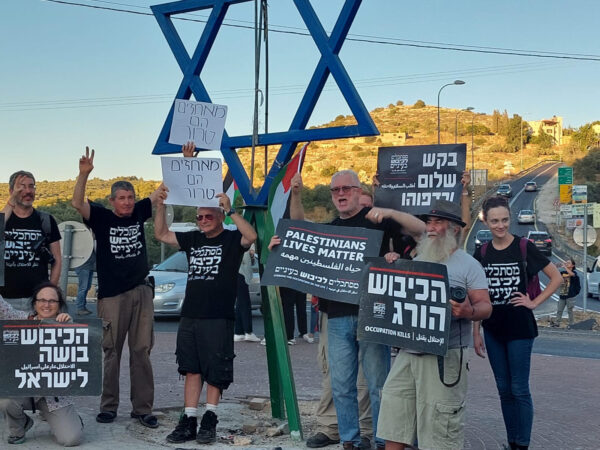 The operation against the Nahala campaign.

In addition to this regular weekly activity, we also run targeted campaigns. Recently, we worked intensively in cooperation with other organizations to thwart the plan of a lawless settler organization called “Nahala” (“ancestral homestead”), headed by Daniella Weiss, a veteran settler who has been working for years to implant her Messianist vision. Nahala initiated a large public campaign for building dozens of illegal outposts all over Palestine on July 20. But despite their scandalous announcement that made a laughingstock of the law – the authorities remained indifferent and took no action against them.

Our aim was to get the government to act against Nahala’s plot, as well as use this event to draw focus to the danger posed by the Messianic movement and ideology. We operated in two ways – the first was to create public resonance ahead of July 20, and the second was to act on the day itself.

As part of our public effort, we wrote many letters to decision makers and influencers in Israel and abroad, ran an intensive campaign on social media, pitched articles to the traditional media and provided information to journalists, held demonstrations, and carried out two large petition-signing operations throughout the country. We also distributed flyers and held activities around President Biden’s visit to Israel. At first, few in Israel were aware of the issue, but awareness grew as the deadline approached.

In preparation for the day-of activity on the ground, we collected intelligence to understand where the outposts were going to be established (information the settlers had tried to keep secret), planned the operation itself, and recruited activists. It was decided to divide the area into three sectors – each under the responsibility of a different organization. We, “Looking the Occupation in the Eye”, received the central sector, near ​​the city of Ramallah. On the day of the operation, we went to the area with about fifty people and acted in tandem with dozens of Palestinian colleagues. We managed to bypass army and police checkpoints and stand directly in front of the settlers, in the area of ​​the village of Beitillu, across from the criminal outpost “Gofna” that the settlers were trying to establish. This forced the army to interpose itself between us and them. The settlers’ movement has an orientation toward violence and there will always be someone among them who will try to start a fight. So, our presence on the ground compels the security forces to act to prevent violence. If the Palestinians had acted alone – it is likely that some would have returned in an ambulance and some would have been taken to detention. Israelis are still treated differently. 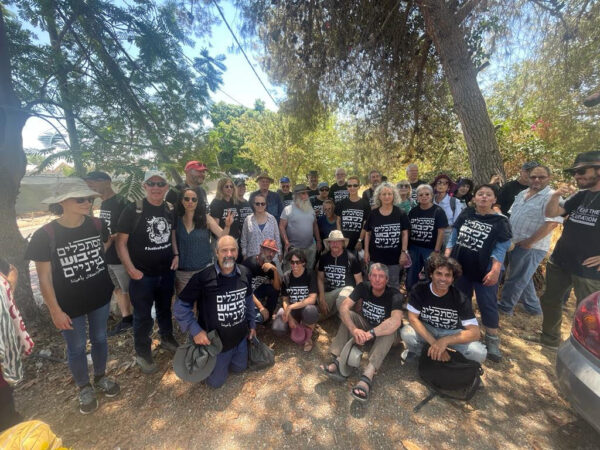 The action team to block the Nahala campaign – at our staging area.

Because of our campaign, and in order to avoid possible conflicts between us and the settlers, the security forces had to prepare extensively to prevent the settlers from accessing their intended outpost sites. In the end, not a single outpost was established and the settlers’ plan was foiled, largely thanks to the intensive action by our organization and others. The event was widely covered by the media, and the activities of the various organizations, ours among them, gained significant exposure.

The settlers of “Nahala” have not given up completely and are still trying to establish the outposts, but their momentum has stalled and they lost most of the support they had at the time. We are monitoring the situation and will take action against them again, if need be.

To summarize – we are a small but growing activist group that works intensively and vigorously to put a spotlight on the occupation, and resist the Messianic and violent settler movement, so that Israel might still enjoy a sane future. We don’t act out of despair; rather, we are motivated by a desire to win, and we do win. Small victories – but such that, along with determination and perseverance, we are sure will lead to the great victory of ending the occupation and the conflict.

Sincerely, the Looking the Occupation in the Eye team.

Guy Hirschfeld has been a leftwing activist for 20 years and is a leading activist in “Looking the Occupation in the Eye”.

Doron Meinrath, a reserve colonel and high-tech project manager, is an activist in “Looking the Occupation in the Eye”. 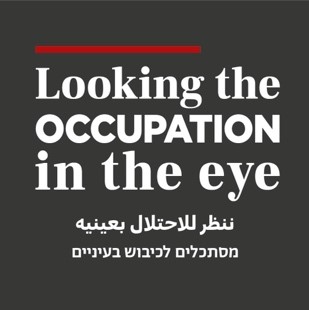