Feminism Has Made Me a Peacemaker
By Ruhama Weiss

I know both sides of the parade of flags in Jerusalem. As a Jerusalem girl who grew up and lived in the religious Zionist community, on Jerusalem Day I used to go with my friends in Bnei Akiva to the Merkaz HaRav Yeshiva where we gathered for prayer (the boys inside and the girls, of course, outside). After the prayer service, we marched with flags, dancing and singing to the alleys of the Old City and from there to the Kotel, the Western Wall.

I am amazed that I have no recollection of the faces of the Arabs of the Old City, whose streets we passed on the way to the Kotel. We celebrated the victory of the State of Israel in the Six-Day War, ignoring the fact that for residents of East Jerusalem, this is a deep wound.

I think that in those distant days, the parade was a little less nationalistic and a little less violent, and I was much less aware of the political complexity. I couldn’t see and certainly was unable to contain the Palestinians’ suffering.

As an adult, my world moved away from the world of religious Zionism. The distancing had to do with my feminist awareness, but it went hand in hand with my political awareness. Women’s rights are part of the rights of Adam and Eve, and as this consciousness becomes sharper, it becomes more difficult for me to rejoice in an event that causes suffering to others. Feminism has made me a peacemaker.

It is not easy to live in Jerusalem, and it is not easy to be a peacemaker in Jerusalem. It is a city of tensions, and every day new commandments are unfolding at our doorstep, acts to repair the world that must be undertaken so that Jerusalem will be a less injurious, wounding city. From time to time I ask myself whether the struggle for peace can be less painful and grinding, whether I can also find happy and joyful ways of living a life of peace. Pain and commitment I find in abundance – the joy of peace is a rare commodity in my city.

And yet there are moments; and the Flower March, which has been taking place for several years in Jerusalem, in parallel to the rightwing Flag March, is such an event. About 200 women and men marched this year. Our arms are full of flowers, in our pockets there is ready folding money, in order to purchase something from the Palestinian merchants who dared to open their stores on this day. And my heart is smiling, because that is the emotion that flowers evoke in me: their colorfulness, the beauty and joy they bring to those who received them.

This special Jerusalem event is organized by a wonderful organization called ‘Tag Meir’ whose mission is to respond with determination, light and love to terrorist activities carried out by Jews.

We handed out flowers intentionally to all around, to the police officers and wished them success in their impossible mission. To the right-wingers, who were preparing for the parade of flags, and we handed out flowers and happily stopped for a political conversation. Some accepted the flowers, others threw them at our feet, but we moved on. We lingered in Palestinian shops whose owners received a huge number of flowers. We saw Palestinian residents collecting a flower from each of us and assembling a bouquet. One guy told me that he was making a bouquet for his beloved, and I was happy together with him.

The flowers were accompanied by short letters in three languages (Arabic, Hebrew and English) that expressed our pain over the turmoil and violence experienced by the Palestinian residents during the flag parade, and not only during it, and our desire for peace.

No, we have not changed the face of Jerusalem. We were a tiny drop in the sea of belligerence and hatred that unfortunately characterizes Jerusalem Day. But we were not alone and we were not insignificant. Other events are held in Jerusalem aimed at creating peaceful coexistence, getting to know each other and expressing mutual acceptance. And our flowers testified that even if we are a minority, we are a determined and committed minority. We will continue to adhere to peace and love and strive to fulfill our spiritual commandments and bring better days to the world. 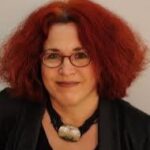