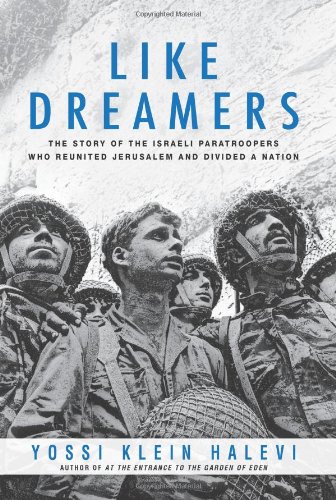 When Yossi Klein Halevi read passages of his new book, Like Dreamers: The Story of the Israeli Paratroopers Who Reunited Jerusalem and Divided a Nation, at a Manhattan Barnes & Noble store, I was reminded of his brilliance as a writer.  At the Q & A, my hand shot up with the first question, asking how he could so compellingly get inside the head (as if writing a novel) of the deceased rock musician, Meir Ariel, whom he profiled (among many) in this work of non-fiction.  His response was that the book took something like ten years to write, with him utilizing his experience as a journalist to conduct hundreds of interviews; specifically regarding Ariel, he interviewed his wife and soldiers he had served with, as well as viewing videos of him speaking on television.

But it pained me that he still cleaves to a facile “centrist” political vision that he has held for a couple of decades now, of the sort that keeps on blocking a majority of Israelis from taking the hard steps away from the settlement enterprise that has hobbled Israel for so long.  In depicting the lives of the elite soldiers who captured East Jerusalem in 1967, he equally honors both the legacy of those who went left into the ranks of Peace Now — whom he honors but regards as naive — and those who went right, into the pioneering settler movement in the newly conquered territories, in whom he also finds a naive idealism with strong parallels to their compatriots on the left.

I see the old army veterans of Peace Now as realists, with naiveté on the left only among the relatively small number who advocate a single state rather than two states.  My view of Klein Halevi remains as it was when I saw him in 2006:

. . . Klein’s a moderate who does not lament his support for Sharon’s disengagement from Gaza and sees a need for further withdrawals from the West Bank. He is very typical of Israeli political attitudes, a bellwether who has long voted for the winner in elections. In ’92 he supported Rabin, in ’96 he switched to Netanyahu, in ’99 he was for Barak, in 2001 and 2003 for Sharon, and in 2006 for Olmert. He now joins with a majority of Israelis as seeing Olmert as an empty suit [my guess is that he again voted for Netanyahu in 2009, and almost certainly for Yair Lapid early this year].

He proudly sees himself as a realist who rejects the Greater Israel fantasies of the right while also rejecting the “naivite” of the left. Not once do I recall him mentioning the option of actually engaging with Mahmoud Abbas in negotiations or of responding to, at least in terms of exploring, the Saudi/Arab League peace proposal. He now sees the prospect for a Palestinian state as nothing more than a terrorist “Hamasland.” He categorically rejects the notion that if Israel withdrew to the pre-1967 borders, peace would result; he might even be right, but in prejudging the Palestinians in this way, he engages in stereotypic thinking . . .

You would think that Klein would be humble about his political instincts, because not only has he consistently voted with the winner, but he’s also consistently seen his prior choice as a mistake. One can forgive him his youthful indiscretions as a Kahane supporter and then perhaps an overly vociferous leftist before making aliya, but his political mood-swings as an adult undermine his credibility as an analyst.

At that bookstore the other week, he was not challenged politically at all, not even by me. He deserves respect as a writer and a sensitive thinker, but it would have been good to get an alternate vision out there.  Klein Halevi reflects Israel’s political paralysis, with a moderation that is stuck because he and most Israelis don’t trust the Palestinians enough to move against the pro-settler right in a decisive way.