Kerem Navot: Exposing the Israeli Land Grab in the West Bank
An interview with Dror Etkes

Founded in 2012, Kerem Navot (“Naboth’s Vineyard”) is an Israeli nonprofit that was created to fill a niche in the panoply of anti-occupation organizations – that of comprehensive, long-term land-use research that exposes and challenges the discriminatory, dispossessive Israeli land policy in the occupied territories. The NGO focuses almost exclusively on the West Bank, though it will also report on land allocations in support of the settlement enterprise within Green Line Israel.

Kerem Navot shares the results of its research in Hebrew, Arabic, and English. Its trilingual output stems from its refusal to accept the mainstream Israeli assumption that occupation is a domestic Israeli problem. Saying it’s a “domestic” issue implies that Palestinians have no right to participate in a discussion of their future, said the NGO’s founder, Dror Etkes, in an interview with Partners for Progressive Israel. It would be like claiming that the invasion of Ukraine is a ‘domestic Russian problem,’ he added, noting that the occupation is a “global problem, and definitely a Palestinian-Israeli problem. Palestinians are victims of the system.”

The NGO’s target audience, therefore, is anyone across the world who would find this information useful – the press, the diplomatic corps, policy makers, international bodies, other NGOs in Israel/Palestine, and, of course, the general public.

Kerem Navot researches the various mechanisms which the Israeli government has employed in the service of its “land grab machine,” as Etkes, calls it, seeking to document and expose them. In December 2018, for example, a Kerem Navot paper entitled “Seize the Moral Low Ground” documented how the military uses land seizure orders in the name of “security needs.” Another report, “Bed and Breakfast on Stolen Land,” listed and mapped out, for the first time, all of Airbnb’s and Booking.com’s rental offerings in Israel’s West Bank settlements, while offering policy recommendations to both companies, and to the UN. 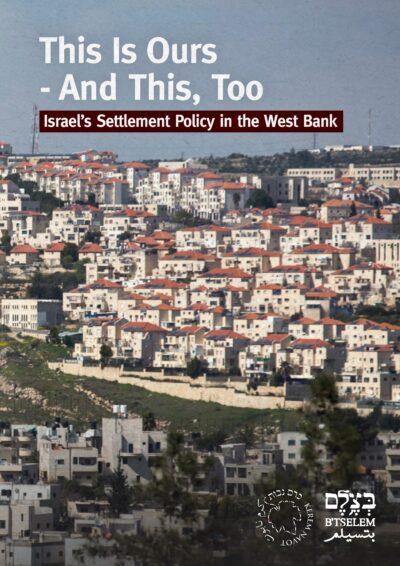 In the discussion with Partners for Progressive Israel, Etkes explained that one of the goals of the organization is to show that dispossession of Palestinians is not a recent phenomenon, but a pattern that has been going on for decades. “Yes, Netanyahu was more blunt and less interested in concealing the truth, but he didn’t invent [the system],” Etkes noted. Last year, for example, Kerem Navot co-authored (together with the B’Tselem human rights organization) “This Is Ours – And This, Too,” which shed light on the financial, legal, and planning mechanisms that Israeli authorities have been using for over five decades to bolster the settlement project.

Kerem Navot also digs for historical documents in the State archive in order to expose the roots of the current policy, dating back to the 1970s. One recent archival find, for example, involved official letters to the government in the late 1970s from three early West Bank settlements – Ofra, Tekoa, and Kiryat Arba. The settlements expressed deep concern over the possible implementation of then-Prime Minister Menachem Begin’s West Bank Autonomy Plan and explicitly urged the government to grab additional Palestinian lands to guarantee the settlements’ continued expansion.

One area of Kerem Navot’s research of particular interest to those who live in the Diaspora is the dispossession work being perpetrated by the World Zionist Organization’s (WZO) Settlement Division.

The Settlement Division (SD), Etkes explained, organizationally is part of the WZO, but 100% of its budget comes from the Israeli government – specifically from the Prime Minister’s office. That budget amounts to hundreds of millions of shekels each year, making the SD the Israeli government’s main subcontractor for creating new West Bank settlements.

Despite its public status, though, the work of the Settlement Division has become virtually opaque. A law passed in 2015 shields the SD almost completely from Israel’s Freedom of Information Act, blocking transparency. As a result, exact numbers are currently impossible to come by, but Etkes estimates that “hundreds of thousands of dunams” of expropriated land (1 dunam = 1/4 acre) have been transferred to the SD by the Israel Defense Forces (via its “Civil Administration” division); the SD in turn allocates that land to settlers in a process that the public is barred from seeing. “We know for sure the SD gave land to settlers,” Etkes stated, but “we are totally blocked” from knowing the exact amounts, the specific recipients, and the precise conditions stipulated.

To correct this situation, Kerem Navot is planning to serve a legal petition in an effort to compel the State of Israel to force the SD to open its database to the public. But this will be a drawn-out and complex juridical process.

Etkes stressed that Israel’s settlement enterprise has always operated on two parallel channels – an official channel that the Israeli government uses to take occupied land and give it to Cabinet-authorized Israeli settlements, and, from the very beginning, an unofficial channel of land grab that promotes the same goal, but employs tools that are illegal even under Israeli occupation law. The SD, he said, is involved financially and organizationally in both channels, and we have evidence of this also from the 2005 “Sasson Report,” completed before the anti-transparency legislation went into effect.

The Sasson Report, which detailed unauthorized outpost activity in the late 1990s and early 2000s, found that the Settlement Division was one of the main bodies involved in what Etkes referred to as “criminal land grab – I don’t have a nicer way of saying it.” Unfortunately, he noted, the efforts that ensued following the report’s publication to restrain the SD’s activity or at least make it more transparent were stymied by Netanyahu’s return to power in 2009.

In the unofficial channel, Etkes continued, the Settlement Division works together with settlers to distort legal reality – creating the false impression that private land which belonged to Palestinians had been officially expropriated, even though that was never the case. The extra-legally expropriated land is then allocated to settlers, who build upon it to cement their control. Etkes: “The Settlement Division is deeply involved in this fraudulent mechanism – not one or two cases, but systematic involvement in support of the criminal channel of the Israeli land grab machine in the West Bank.”

Kerem Navot has also conducted a careful analysis of mortgage records and found that the Settlement Division for years has provided land-grabbing settlers with favorable mortgages and loans, whose repayment is often excused. Most of these mortgages have been issued over the last decade, Etkes noted.

Under Netanyahu, Etkes added, the Settlement Division amped up its involvement with the unofficial land grab channel, and this became even more acute during the Trump presidency, when the U.S. gave Israel freer rein, and towards the end of Netanyahu’s premiership, when his legal woes made him vulnerable to growing settler demands.

The WZO Settlement Division, Etkes summarized, is there to do the job that the Israeli government doesn’t want to do directly and sometimes can’t do officially – that’s an open secret, he said, and is why the SD get its budget and enjoys impunity.

Etkes stressed that it was important for him, in creating Kerem Navot, not to compete with other NGOs, or duplicate their important work. As a result, his organization focuses on an obscure, yet crucial, area of activity that no one else has taken on in order to reveal information that otherwise would remain concealed.

In closing, Etkes observed that, now that a Democrat has returned to the White House and Netanyahu is out of office, Israeli expansion on the West Bank might not be as unabashed as it once was. But the land grab situation in practice, he said, is not substantively different. In today’s domestic and international reality, he argued, there are simply no counterforces to compel official Israel to behavior otherwise.

Dror Etkes is the founder and chief researcher of Kerem Navot.
He was interviewed by Ron Skolnik.