Jerome Chanes Reviews ‘Out of Palestine’

Jerome Chanes Reviews ‘Out of Palestine’ 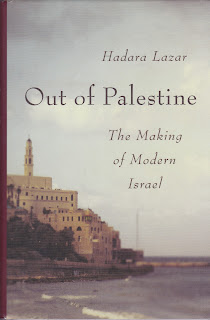 Writing in The Forward where he’s a contributing editor, Jerome A. Chanes, our resident historian, is enthusiastic about Out of Palestine: The Making of Modern Israel.   The author, Hadara Lazar, is an Israeli novelist who conducted “dozens of interviews with military, civilian and political actors from the Arab, British and Jewish communities to tease out a social, political and military history of 1940s Palestine. Almost the entire book consists of direct quotes….”

It’s not that he finds her work flawless, as he notes in a comment on the historical antecedents of a Zionist stream (Hashomer Hatzair and Mapam) that our own organization feels kinship with:

Lazar is not always sure-footed when it comes to historical detail. The Palmach was not simply a function of the Haganah paramilitary force, as Lazar suggests; rather, it came out of deep ideological struggles between the regnant socialist Mapai party, which generated the Haganah, and the more radical leftist Ahdut Ha-Avodah and Hashomer Hatzair kibbutzim, from which emerged the “Plugot Machatz,” or “Striking Forces” of the Yishuv — the Palmach. [Ahdut Ha-Avodah and Hashomer Hatzair merged in 1948 to form Mapam, a predecessor of Meretz.]
This point is more than mere nuance; it tells us that the Jewish community in Palestine — in large measure derived from the Eastern European Jewish world — was all about ideology and “movement,” and that the institutions of the Yishuv derived from these struggles. This dynamic, important to the understanding of the Jewish presence in Palestine, is missing from “Out of Palestine.”
Further, Lazar’s otherwise engrossing interviews with Arabs could have been more enlightening had the author told us about the crucial significance of family, clan and “tribal” loyalties in the Arab world, both Muslim and Christian. …
But “Out of Palestine” is more than a congeries of anecdotal memoir. The book shows us how much of the “making” of Israel had its foundation in the activities and interactions of the three actors —Arab, Englishman, Jew — who became entrenched enemies of one another. Lazar’s interviews transform the tale into history, and she winningly brings the history to life.