Eight party leaders participated yesterday in a debate on Israeli TV Channel 2. Only Binyamin Netanyahu and Isaac Hertzog decided not to take part. Like most debates, it was more about the questions the candidates avoided than the plans and thoughts they chose to share. Israeli journalists write that the debate offered no real surprises. Yet, for the ears of the American Jewish community, some of what was said would have been shocking. In an Israeli election debate racism and hatred are not disguised. Candidates call it as they see it – Arabs, traitors, fifth columnists and simply haters. 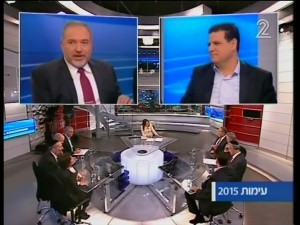 Thus, for example, Yisrael Beytenu’s leader, Avigdor Lieberman said that he is happy about the formation of the Joint (Arab) List. It proves, he said, that there is no difference between Islamists, communists and Nasserites (Arab Nationalists).” At the end of the day, all Arabs are the same. The Joint List, he continued, “shows how great their hatred of Israel is.” Of course, it was Lieberman who devised the law raising the minimum threshold for entry to Knesset from 2 percent to 3.25 percent in order to rid the Knesset of the Arab representation. The Joint List was merely the Arab parties’ inevitable response – they could have joined forces or vanished.

But for Lieberman reality is flexible. When Ayman Odeh, the Joint List leader, responded pointing to Lieberman’s racism and said “I feel like [Lieberman] landed from the 1930s… We are 20% of the population.” Lieberman shook this one off too – “For now,” he retorted.

It was amazing to see that the only person brave enough to protest this racist incitement was Meretz leader, Zehava Galon. Statements like: “You are working to destroy Israel from within. You are a fifth column, you represent terrorist organizations in the Israeli Knesset… What are you even doing here? You call yourself Palestinian, not Israeli, so you should go to the Palestinian parliament so Abbas can pay you,” simply passed over the heads of the other candidates. Neither the moderator nor the six Jewish political leaders around the table thought something was not quite right about tagging 1.7 million citizens as traitors and suggesting they should be moved to the Palestinian Authority or Syria.

Judging from what the other candidates said, they all seemed to agree with Lieberman. Statements like “We are all Jews,” for example, suggested that party leaders simply do not count the minority.

Perhaps we should not be surprised. After all this is the same election campaign in which the man aspiring to lead the leftist bloc, Isaac Herzog, organized his friends from the elite IDF intelligence unit to present him in a campaign clip as capable of leadership because he had seen Arabs through the scope of a gun.

Our job was not something that everyone does/ The specific things that Buji [Herzog] dealt with are very sensitive./ It’s an indescribable responsibility./ Buji did things that we cannot speak about./ You have to make decisions quickly based on information/ Sometimes it was life and death/ He grew up in the unit, it means that he knew the Arab mentality/ He saw the Arabs in all sorts of situations./ He saw them through the scope of a gun./ He spoke Arabic and read Arabic materials./ The most important person is the one who makes decisions based on the information he has, whether to shoot a missile or send fighter on the ground./ This is an opportunity to kill these people…/ The adrenaline that flows days later…/ And Buji for me as an officer was in these moments, I must say, a role model./ He knew how to make the right decisions./ He did it great.— Herzog, a balanced and responsible leader.