Building upon the Palestinian statehood resolution at the UN, our friends in the Meretz party have just announced a “Four Point Plan” for peace.  The wording is somewhat awkward in English, but it involves a replacement of the Oslo framework by state-to-state relations between Israel and Palestine, a one-year timeframe for negotiating a final-status agreement, a four-year limit on fully implementing that agreement, and mechanisms to immediately engage with the Saudi/Arab League peace initiative by involving regional powers (including the Arab League) in negotiations for a regional peace.  This five-year horizon will include Israel freezing construction in the settlements, releasing prisoners and dismantling checkpoints (with these measures heavily front-loaded in the first year). 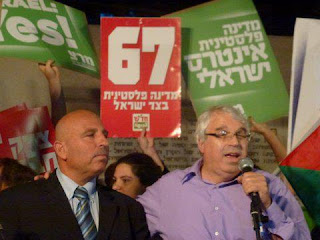 And Hillel Schenker wrote about a rally in Tel Aviv that celebrated the UN vote in favor of Palestinian statehood.  He brings to mind:

“the famous recording of the UN General Assembly vote back on November 29th, 1947, the acceptance of UNGA Resolution 181, the Partition Plan.   And we all remember the roll-call – the United States – Yes, the Soviet Union – Yes….

There was a sense of excitement … with large green signs saying ‘Israel – Yes!’ and Israeli and Palestinian flags waving in the air.”

Some of us in New York showed our support for Palestinian statehood last week with this same “Israel: Yes!” banner, meant to remind people of the historic UN vote for Israel exactly 65 years before.  (“Meretz: the Left of Israel” is written in Hebrew.)

Two people we met on the Partners’ Israel Symposium this past October, figure in a NY Times news article on newly announced settlement expansion in the vicinity of Jerusalem.  Hagit Ofran was our guide, from Peace Now, on a tour of the Gush Etzion and Hebron settlements; Dani Dayan spoke with us one day in Tel Aviv, representing the pro-settler view:

…. A senior Israeli official … said on Friday that the decision was made late Thursday night to move forward on “preliminary zoning and planning preparations” for housing units in E1, which would connect the large settlement of Maale Adumim to Jerusalem and therefore make it impossible to connect the Palestinian cities of Ramallah and Bethlehem to Palestinian neighborhoods of East Jerusalem. Israel also authorized the construction of 3,000 housing units in other parts of East Jerusalem and the West Bank, the official said.

The prime minister’s office refused to comment on whether the settlement expansion … was punishment for the Palestinians’ success in upgrading its status from nonmember observer entity to nonmember observer state at the United Nations, but it was widely seen as such. The United States, one of only eight countries that stood with Israel in voting against the Palestinians’ upgrade, has for two decades vigorously opposed construction in E1, a 3,000-acre expanse of hilly parkland where a police station was opened in 2008.

In Washington, a State Department official criticized the move. “We reiterate our longstanding opposition to settlements and East Jerusalem construction,” he said. “We believe it is counterproductive and makes it harder to resume direct negotiations and achieve a two-state outcome.”

Hagit Ofran, who runs the Settlement Watch project of Peace Now, called E1 a “deal breaker for the two-state solution” and denounced the decision as “disastrous.”

But Dani Dayan, leader of Israel’s settler movement, welcomed the news, saying it was “a very important Israeli interest to develop E1.”

In the meantime, J Street is credited with a concentrated email and phone call campaign against a failed attempt in the US Senate to shut down the Palestinian diplomatic mission in Washington, DC.