Israel & US on same page re Iran?

Israel & US on same page re Iran? 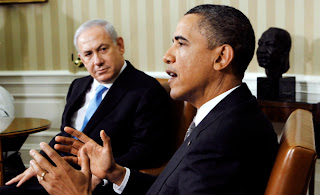 It troubles me that most people on the left, who are justly worried about war with Iran, are placing the onus upon Israel, as if Iran’s years of overt hostility and belligerent acts have nothing to do with this crisis.  I believe that an Israeli attack on Iran would be disastrous for Israel and bad for the US, but Israel needs to be reassured that its existence is not on the line. It’s up to Iran to step back from its rhetoric and policies, in order to alleviate the crisis atmosphere.

I’m not opposed to an ultimate deal that includes Israel allowing international inspections of its nuclear facilities, but Iran’s hostility is the problem, not an Israeli nuclear arsenal that has threatened no one for decades.  Iran may be reaching the critical stage of uranium enrichment that Israel and the International Atomic Energy Agency both fear.

Hopefully, an intelligent combination of international diplomacy and sanctions can persuade Iran to cooperate fully with the IAEA to assure that its nuclear facilities are only used for peaceful purposes. During Prime Minister Netanyahu’s visit to Washington, the US and Israel struggled to get on the same page. The US needs to prevent Israel from launching a preemptive attack, but this can only be done if Israel knows that the US has its back when it comes to deterring Iran.  In an interview with The Atlantic’s Jeffrey Goldberg, Pres. Obama is saying exactly that.

Engaging in cyber warfare–even the ugly step of assassinating Iranian nuclear scientists–are far preferable to an all-out attack.  What I took away from Sunday’s 60 Minutes segment on the stuxnet computer worm is that this cyber-weapon could have stayed inside the Iranian machinery, sabotaging their program for years without detection, if not for the fact that third parties disclosed its existence.

Charlie Rose hosted an excellent discussion with Jeffrey Goldberg and Dennis Ross on the Obama-Netanyahu meeting.  Goldberg raised the hope that Supreme Leader Ayatollah Kameini’s statement that nuclear weapons are “unIslamic” may provide Iran with a face-saving “off ramp” for this crisis.

This discussion also touched upon what the two allies wanted from each other and probably didn’t get: Netanyahu was looking for a US commitment to take on Iran militarily, if diplomacy and sanctions don’t bring about proper safeguards against Iran weaponizing its nuclear development. Otherwise, the doubts that Yossi Klein Halevi writes about in The New Republic, that the US will not back up Israel’s vital security needs, may prevail in Israel’s internal policy debate.  But an understanding that the US will take out Iran’s nuclear program by a date certain, with Israel holding back in the meantime to allow diplomacy and sanctions to work, does not seem to have yet materialized; that is, unless, Netanyahu’s statement that Israel reserves the right to defend itself, is part of an agreed-upon “good cop, bad cop” routine to maintain pressure on Iran.  Netanyanhu is correct to be concerned that negotiations can be strung out as an effective delaying tactic and a subterfuge, allowing Iran to advance toward weaponization.

Would Iran be so “irrational” (argue anti-war critics) as to risk instantaneous nuclear destruction in return for a nuclear attack on Israel?  That is the question, and it’s Israelis who live under the shadow of an unknown answer.  A recent poll indicates a sharp division among Israelis in this regard, with a majority skeptical on the utility of military action.  I’m with them.

Unfortunately, some noises from leading figures in Iran are not reassuring on this matter.  For example, ten years ago, Akbar Hashemi Rafsanjani, a former president of Iran and still a leading figure now associated with reformist elements in the Islamic Republic, chillingly speculated that since “the Islamic World” is much larger than Israel, it could fight a nuclear war with Israel and survive (“the use of even one nuclear bomb inside Israel will destroy everything“).  The threat that Israelis sense from Iran is reasonable—augmented further by Iranian allies inhabiting three of Israel’s borders (Hezbollah in Lebanon, Hamas in Gaza and Assad in Syria).

And what if the Iranians give a bomb, or nuclear material to Hezbollah, Hamas or Islamic Jihad?  Especially with the last of these three–a terrorist group that (unlike the other two) governs no territory and need not feel national responsibility–whom does Israel or the US retaliate against if Islamic Jihad ignites a suitcase atomic device or a radioactive dirty bomb in the middle of Tel Aviv?

To argue, Davka, with a nation of Jews (within living memory of the Nazi genocide) that Iran wouldn’t be so insane or illogical as to possibly attempt a nuclear holocaust against Israel–given the strong likelihood of nuclear annihilation in turn–is in itself illogical, because it’s ahistorical.  If Adolf Hitler had been overthrown or assassinated in the mid-1930s, would anyone have likely read Mein Kampf as an indication that he might have committed genocide against the Jews?  He would never have been so “insane” or “irrational,” right?  The Islamic Republic’s fixation with Israel–a former friend of Iran, over a thousand miles away and with no history as an enemy–is in itself “insane.”

But let’s look forward to the new effort at negotiating a solution with Iran, just announced yesterday. Let it succeed, speedily, for everyone’s sake.