A Virtual Invocation
By Ben Sharif

As a young American Jew concerned with the ongoing crisis in Israel/Palestine, I’ve often wondered what the role of the Jewish diaspora should be in this struggle. I had been exposed as a teenager to the horrors of the Israeli occupation; the dehumanizing barbed wire-lined fences and screeching barred turnstiles of Qalandia checkpoint are etched in my memory. Ten plus years removed from that experience, the situation had only seemed to worsen after multiple futile Israeli elections and the Trump administration further enabling sinister policies of annexation and devastation. Partners for Progressive Israel’s 2020 virtual symposium seemed to offer a unique and affordable opportunity to listen to, engage with, and learn from a diverse range of Israelis and Palestinians to better determine how hopeless the situation really was.

Gazans educated us about their economic, infrastructure and employment limitations, as well as their rising suicide rate. Palestinian citizens of Israel and Ethiopian Jews expressed the marginalization they face on a daily basis, reinforced by the notorious ‘Nation State Law.’ I’ll never forget Issa Amro from Hebron explaining the difference between the dehumanizing military law he was subject to and the more lenient civil law governing Israeli settlers, all while experiencing recurring electricity outages during our Zoom session. And yet, in a session with Knesset members from various parties, Uzi Dayan of Likud told us “You worry too much about the Palestinians.”

The situation is clearly dire, and I’m grateful to have been exposed to realities not offered by most American media outlets. Progressive activists representing organizations doing essential work on the ground such as Breaking the Silence, Givat Haviva, and Gisha relayed the urgent need for foreign pressure to hold the Israeli government accountable. Our mission, representing the American Jewish diaspora, became abundantly clear: we must thoughtfully question many of the narratives we’ve taken for granted about the historical and seemingly cyclical tension between these two peoples, as well as our role as bystanders in the perpetuation of injustice. We must activate our communities by sharing what we have learned. Americans in particular must vehemently urge our legislators to prioritize policies furthering Palestinian civil rights and genuine sovereignty. It seems inherently un-Jewish not to. 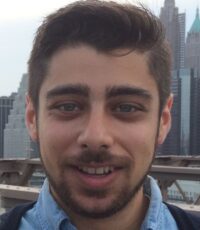 Ben Sharif is a Brooklyn-based documentary filmmaker specializing in video editing and human storytelling. A graduate of the Film & Television Production program at NYU Tisch School of the Arts, he has spent the past 8 years editing documentaries, short films, commercials, fashion ads and music videos