Israel has been in a unique, even paradoxical, position regarding its efforts to contain the Coronavirus pandemic outbreak. On the one hand, it has been unable to prevent the rapid spread of the pandemic and, as of January 16, has racked up the astonishing number of more than one-half million positive cases since its outbreak last year. It also has the dubious distinction of being ranked as 17th highest in the world with regard to a positive diagnosis for the Coronavirus per one million persons. At the same time, Israel has been at the forefront of the vaccination effort, currently leading the world in per capita vaccinations, with more than 22% of its population now vaccinated, a number which is rising rapidly. This remarkable achievement can be attributed to Israel’s excellent national health care system, as well its arrangement to obtain vaccines in return for providing statistical data to the manufacturers about the impact of the vaccination on its population.

While this impressive vaccination campaign is going on, one thing that has been completely overlooked is the responsibility of the State of Israel to ensure the safe and timely vaccination of the Palestinian population in the West Bank and Gaza. According to media reports, Israel has rejected unofficial requests from the World Health Organization to assist a vaccination operation in the Palestinian territories, and Israel has not provided any assistance to the Palestinian Authorities in obtaining or distributing vaccines. As the occupier, however, Israel is under obligations towards the occupied population under international law. Those include general obligations to ensure the safety and security of the population, which includes a requirement to ensure the health of the population (Regulation 43 of the Hague Convention on the Law of War on Land (1907)). It should be noted that Israel made unconfirmed claims the Palestinian Authority rebuffed Israeli offers of help in obtaining vaccine doses, which the PA disputes, and now asserts it will assist in getting vaccines for Palestinians in some distant and hypothetical point in the future, after Israelis have been vaccinated.

There is also a specific obligation to prevent the spread of communicable diseases, i.e., “to the fullest extent of the means available to it, the Occupying Power has the duty of ensuring and maintaining, with the co-operation of national and local authorities, the medical and hospital establishments and services, public health and hygiene in the occupied territory, with particular reference to the adoption and application of the prophylactic and preventive measures necessary to combat the spread of contagious diseases and epidemics” (Art. 56 of the 4th Geneva Convention). These obligations should be read as requiring Israel to purchase vaccines for the Palestinian population, since Israel is better positioned to do so than the Palestinian Authority, in light of the economic, fiscal and political dependence of the Palestinian Authority on Israel. The failure of the Palestinian Authority to provide vaccines for the population does not relieve Israel from this obligation.

But this is not simply a matter of international law: Israel also has a moral obligation to the Palestinian population in the West Bank and Gaza, as well as a legal obligation under its own domestic law. Israel has cultivated the dependency of the Palestinian Authority on its economy, and thus suppressed its ability to develop an adequate health care system. This is true for the West Bank, where Israel maintains control over roughly 60% of the territory by means of the physical presence of its military and civilians. But this is also true for Gaza, where Israel maintains control through governing the perimeters and micromanaging the entries and exits of people and goods in and out of Gaza. With this control comes the responsibility to provide vaccines, especially as the Palestinian hospitals suffer from a chronic shortage of ventilators, PPE, and other medical supplies.

In addition, since Israel is supplying vaccines to the inhabitants of West Bank settlements, offering them to some persons and not others within a certain territory where the only difference between them is their nationality is discriminatory. During the Gulf War, the Israeli High Court of Justice concluded that Israel had an obligation to provide personal gas masks to Palestinians in the Occupied Territories and required the state to purchase such masks ( HCJ 168/91, Morcos v. Minister of Def., 45(1) P.D. 467, 470-71.). The same logic should apply to the vaccines. It should be noted that this is also in the self-interest of Israeli society, which depends on Palestinian labor and still maintains contacts within Palestinian society.

Sadly, there is currently a petition before the High Court of Justice by the family of Hadar Goldin, an Israeli soldier killed in Gaza in 2014 and whose remains are held by Hamas, in an attempt to block Israeli assistance to vaccination in Gaza. While I support the family’s hope that Hadar’s remains will soon be brought back to Israel, this seems a highly inappropriate request to the Court to authorize collective punishment.

There are many different wrongs associated with Israel’s ongoing control over the West Bank and Gaza, but now is a moment in which Israel should do the right thing. This is not a moment for vaccine nationalism, something the World Health Organization is warning us against. It is a moment to take responsibility for those under Israeli control and to save human lives through the speedy provision of the Covid-19 vaccine to Palestinians in the Occupied Territories. 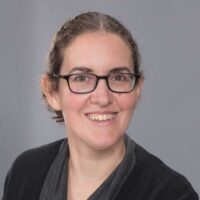