The Jewish Daily Forward website, and other sources, are reporting upon this positive phenomenon of Israelis and Iranians reaching out to each other, to renounce war.  Unfortunately, these do not include the decision makers in their respective governments.  Still, this Forward story includes recent survey data showing 50% of Israelis “completely opposed to an attack on Iran, even if diplomatic efforts to stall the nuclear program failed” and 78% knowing “that even a successful attack would at best delay Iran’s acquisition of an A-Bomb by a few years.” 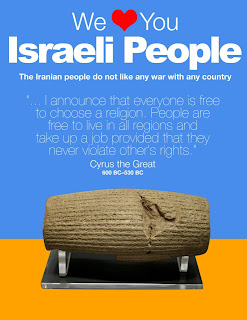 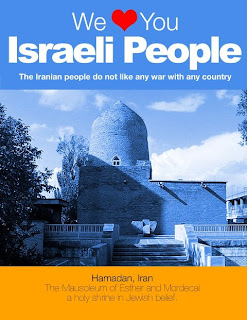 ….  On Saturday night, two graphic designers, Israeli couple Ronny Edry and Michal Tamir uploaded photos of themselves superimposed with a logo saying, “Iranians, we will never bomb your country. We ♥ You” to the Facebook page of Pushpin Mehina, a small preparatory school for graphic design students. In no time, others were copying the meme and the Facebook page garnered a thousand “likes.”
No sooner had the Israelis started posting their own versions on the Facebook and the “Israel Loves Iran” blog, than the Iranians came up with their response. By Sunday, they were uploading photos with the logo, “ We ♥ You, Israeli People. The Iranian People do not like any war with any country.” While some posted personal photographs, others utilized historical examples of benevolence by Persians and Iranian toward Jews. One was of a photo of the Mausoleum of Esther and Mordecai in Hamadan, Iran. Another was of Abdol-Hossein Sardari, the “Iranian Schindler” who helped 2,000 Iranian Jews flee France during the Holocaust. Yet another had the seal of Cyrus the Great, the ruler of the Persian Empire from 600-530 BCE, with the tolerant proclamation: “I announce that everyone is free to choose a religion. People are free to live in all regions and take up a job provided that they never violate others’ rights.”
Edry told Haaretz that private messages from Iranians started streaming in, as well. One wrote him, “We also love you. Your words are reaching us despite the censorship. The Iranian people, apart from the regime, do not hold a grudge nor animosity against anyone, especially not the Israelis…. We never saw Israelis as our enemies. As such, the regime cannot gain public support for war.”…

You may see the most striking of these images at the “+972” online peace site.